The official emblem of the city of Florence, a red fleur-de-lis on a white field, has been pivotal in the all-round symbolism of the club.

Over the course of the club’s history they have had several badge changes, all of which incorporated Florence’s fleur-de-lis in some way. The first one was nothing more than the city’ 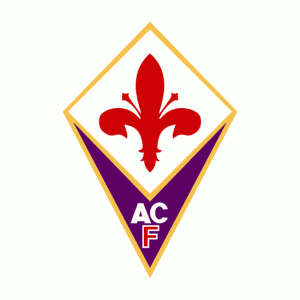 s coat of arms, a white shield with the red fleur-de-lis inside.

It was soon changed to a very stylized fleur-de-lis, always red, and sometimes even without the white field. The most common symbol, adopted for about twenty years, had been a white lozenge with the flower inside. During the season they were Italian champions, the lozenge disappeared and the flower was overlapped with the scudetto.

The logo introduced by owner Flavio Pontello in 1980 was particularly distinct, consisting of one half of the city of Florence’s emblem and one half of the letter “F”, for Fiorentina. People disliked it when it was introduced, believing it was a commercial decision and, above all, because the symbol bore more of a resemblance to a halberd than a fleur-de-lis.

Today’s logo is a kite shaped double lozenge bordered in gold. The outer lozenge has a purple background with the letters “AC” in white and the letter “F” in red, standing for the club’s name. The inner lozenge is white with a gold border and the red fleur-de-lis of Florence. This logo had been in use from 1992 to 2002, but after the financial crisis and resurrection of the club the new one couldn’t use the same logo. Florence’s comune instead granted Florentia Viola use of the stylized coat of arms used in other city documents. Diego Della Valle acquired the current logo the following year in a judicial auction for a fee of €2.5 million, making it the most expensive logo in Italian football.

When Fiorentina was founded in 1926, the players wore red and white halved shirts derived from the colour of the city emblem.[13] The more well-known and highly distinctive purple kit was adopted in 1928 and has been used ever since, giving rise to the nickname La Viola (“The Purple (team)”). Tradition has it that Fiorentina got their purple kit by mistake after an accident washing the old red and white coloured kits in the river. 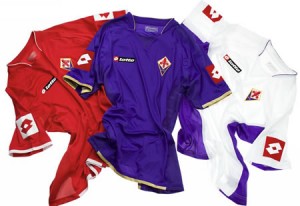 The away kit has always been predominantly white, sometimes with purple and red elements, sometimes all-white. The shorts had been purple when the home kit was with white shorts. Fiorentina’s third kit was first one in the 1995-96 season and it was all-red with purple borders and two lilies on the shoulders. The red shirt has been the most worn 3rd shirt by Fiorentina, although they also wore rare yellow shirts (’97-’98 and ’99-’00) and a sterling version, mostly in the Coppa Italia, in 2000-01.