Prato is home to many museums and other cultural monuments, including the Filippo Lippi frescoes in the Cathedral of Santo Stefano, recently restored. The Cathedral has an external pulpit by Donatello.

Palazzo Pretorio was built from the 13th century in red bricks. The part in white stone is from late-Gothic era. In the 16th century an external staircase and a watch were added. Also notable is the Palazzo Datini, 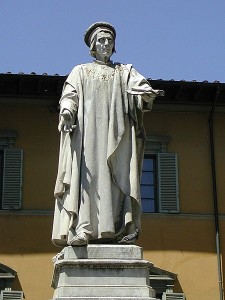 built from 1383 for the merchant Francesco Datini. It has decorations by Florentine artists like Agnolo Gaddi and Niccolò Gerini. In 1409 it housed Pope Alexander V and Louis of Anjou. The Palazzo degli Alberti (12th century) is home to an art gallery with works by Filippo Lippi (Prato Madonna), Giovanni Bellini (Crucifix with Jew Cemetery) and Caravaggio (The Crowning with Thorns).

The Emperor’s Castle, also known as Fortress of S.Barbara or Castello Svevo, is considered the most important Prato’s testimony of 11-13th centuries architecture. It was the headquarters of the Imperial party in the Florentine countryside, seat of the Imperial Viceroy of Tuscany. The main feature of the castle is its aspect: a marvelous example of Federician Castle like the other masterpieces that we can find in the South of Italy, as Castel del Monte or Lagopesole, the only in this part of the Italian peninsula.

The castle’s construction begun in 1237 and ended in 1248 by order of the Holy Roman Emperor Frederick II of Swabia, in the circle of his project to set under military control  the principal ways of communications that brought to Germany, in detail the road that, coming down from the Montepiano Pass (the lowest in the Apennines) crossed the Bisenzio Valley in the heart of Tuscany. This strategical location made the castle an important key in the plan for the new organization of the Italian Kingdom pursued by Frederick Hohenstaufen in the years immediately after his victory at Cortenuova (27 November 1237). This system of fortification consisting in other castles, walled villages (like the near Calenzano) and strongholds all in visual contact (with fire or smoke signals) with each other. At the end of Frederick’s Imperial dream the chain was consolidated by Florence, at defense of its important trade routes.The ‘Magister Murorum’ [architect] of the castle’s was Riccardo da Lentini [supervisor of the construction of Emperor’s other castles in Puglia] with masonry come on purpose from the south. The site of the fortress already held a small fortress, given to the Emperor from a Ghibelline family of Prato, that was incorporated in the new castle.

The castle has a square plan, with towers to all angles and other four, two inherited by the precedent small fortress, at the center of every side of the wall curtain. The walls and the towers are, along the whole perimeter, crowned with the characteristic Ghibelline battlements at ‘tail of swallow’. The towers of the preexisting fortification [higher in origin] incorporate in the construction have compromised the geometric result of the plan, not perfect as in the other  Federician castles of southern Italy, however the symbolism of the octagon (according to the concept of Frederick ‘the maximum display of power‘) was achieved: the castle has eight towers.

The main gate, a doorway with gothic arch, is embellished – and here we notice as the Norman style suffered the local architectural influence 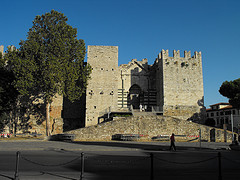 – with decorative elements obtained alternating stripes of white and green marble. The sculptured lions (symbol of Swabia) are a representation of the Imperial power. We can also notice the accurate study on the positioning of the loopholes to allow the front and the side defense. The image of the castle results a perfect fusion between style and military function.

Emperor’s death (1250) brought works to an halt. The inner courtyard of the castle doesn’t preserve traces of the never completed two floors buildings with arcade supported by a row of columns with capitols (some still visible on the walls). In place of this projected structure were built wooden barracks to house the military contingent. Until the recent restorations the inner ward was occupied with modern structures, for long time the castle was used as county jail. Some buildings raised against the external walls, today fortunately completely removed.

The historical center of Prato is rich of medieval monuments as the Cathedral or the Praetorian Palace, but it is important to remember that the city still preserves wide portions of the town walls, visible in more parts even if not more practicable along the watch-walk. The structure that conneceted the castle to the walls was the Cassero

The ‘Cassero Medievale’ of Prato, just reopened to the public after a great work of restoration, is a superelevated fortified walk, accessible from Viale Piave, just in front of the Eastern Gate of the Emperor’s Castle, and from Via Pomeria, entering the Fiorentina Gate of the town walls. The construction of the Cassero was work of the Florentines and started in 1351, after the subjugation of the town of Prato, in order to allow the garrison at defense of the city to reach the castle directly from the town walls and other way round. The inner corridor of the Cassero [ the ‘Corridore del Cassero‘ ], with barred vault and a long series of fanlight alternated to small rectangular windows that gives light to the passage, is now a center for interesting exhibitions. From the Fiorentina Gate, that in practice was a small fortress built against the walls, is possible to approach the upper level of the walk, an open terrace crowned on both sides with Guelphs battlements, from which we have one of the best view on the Emperor’s castle, part of the town walls and the town’s skyline.

Courtesy of Castelli Toscani and Wikipedia