Once again, this coming January, Pitti Uomo will maintain the figures it has attained: over 950 brands will be showing at the Fortezza da Basso, plus 80 women’s collections at the Dogana for Pitti W, bringing the total to more than 1,000 collections presented. 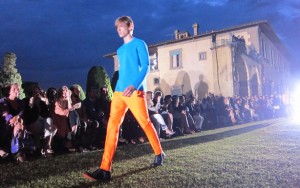 The fair’s role as a point of reference on the international scene is confirmed once again by the increase in the number of applications from other countries (the requests from foreign firms and brands have risen by 20% for this edition).  And let’s not forget the Pitti Uomo buyers: at the last winter edition, out of a total of 30,000 visitors, 23,360 buyers came to Florence representing all the most important boutiques and departments stores in the world. And the Pitti Club, whose members include some of the most prestigious names in the world, has over 150 Italian stores and more than 550 from abroad.

Top companies choose Pitti Uomo and Florence to present their collections and special projects as well as to consolidate their international strategies at the start of the season.  There has been an increase in the number of companies asking to organize events inside the walls of the Fortezza, the perfect venue for expanding their promotional presence and detecting the tastes of both buyers and press.  Here are some of the new features and previews for this edition:
_ the Boglioli project, presenting its style as well as its first accessories collection in a special space on the Lower Level of the Main Pavilion;
_ an important re-entry on the part of Hugo Boss who is bringing the premium Boss Selection line to Pitti Uomo, and will be showing in the Sala Ottagonale;
_ the European launch of the new collection by Arrow – one of the american heritage brands – from the Tommy Hilfiger Group, which will be presented to the Pitti Uomo international audience.
_ the event organized in cooperation with L’Uomo Vogue to celebrate the 125th anniversary of Pantofola d’Oro;
_ the new Archive Research Project – A.R.P. – by Umbro in cooperation with Aitor Throup, a capsule collection that shows what the designer has done with the icon-items in the British football brand’s huge archives;
_ the special presence of Jacob Cohen, who will present a new collection in an important space on the Lower Level of the Main Pavilion;
_  the US fashion designer Adam Kimmel will launch in exclusivity his new project at Pitti Uomo;
_ the Slowear Group will be attending Pitti Uomo with “Tribute to Montedoro”, a stand entirely dedicated to the brand that specializes in jackets and outerwear, established in 1958 and owned by the group since 2001.
_ the Pitti Uomo debut of the Scottish brand Folk Clothing which will be presenting its collection at a trade fair for the first time.