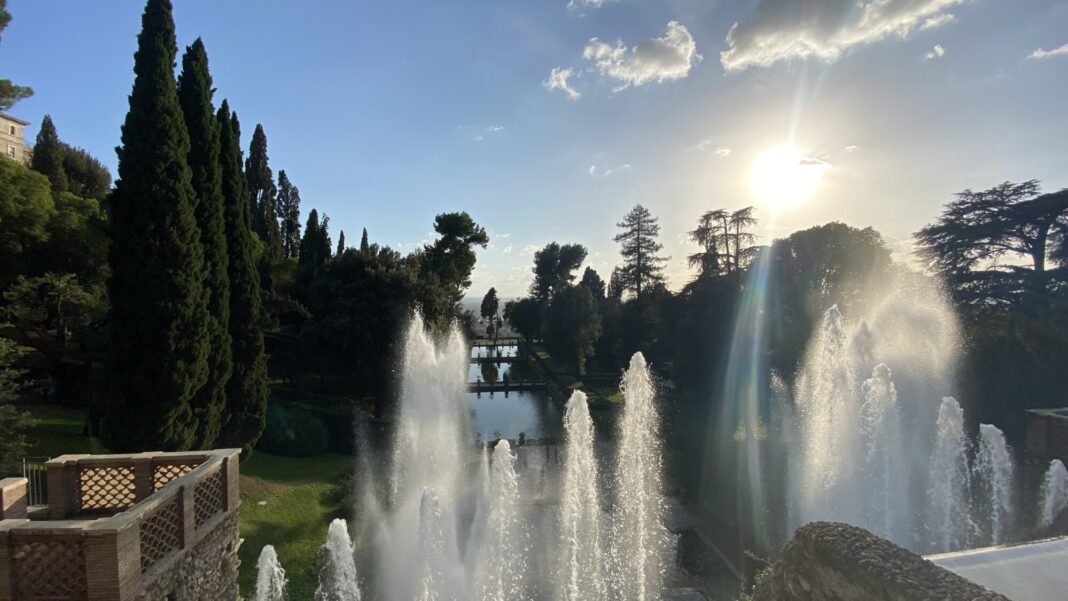 As I promised in my last post, it’s time to bring to you the last stop of our itinerary: Tivoli. If you know anything about Tivoli, great cause I’ve never been, and I was amazed at every corner. Known mainly for its thermal waters that were loved by the ancient Romans, and I mean like they loved it here, there are a gazillion ruins all over, it was also the location for one of the most magnificent Villas to be ever built in the Roman-era: Hadrian’s Villa.

But more about that when I went to visit it, cause we had to get to Tivoli first.

Leaving the Tavoliere di Puglia from the town of Lucera, it was time to go north, leaving all of the best beaches in Italy behind us (and I’m amazed now, imagine when I get a chance to go to Sicily and see these beaches). The ride was long, cause keep in mind we had to cut across the Peninsula, and on the way, we passed through Molise and Campania. Campania is where you find Naples, and Molise isn’t really that famous, but while we were in the car we saw this crazy looking church in a very small town but didn’t have time to stop. So, if you’re ever near Campobasso ask around and I’m sure you’ll find it.

After 3 hours in the car we arrived in Tivoli and in our final location, we actually had indoor parking. It was crazy, we even forgot about the possibility of that happening to someone on a road-trip, I mean I was just hoping we wouldn’t get our car towed half of the vacation, and right at the end indoor parking. AMAZING.

So, the place we were staying in was called the Antica Villa di Bruto (Bruto’s Ancient Villa) and we didn’t think anything of it at the beginning, I mean you’re around Rome you could expect a name of that sort for a place to stay in. You’ve got Roman thermal baths, Roman ruins around you, you know it’s a great name for the location. But no right beneath where we were sleeping was a myriad of ruins. I mean like an actual Villa’s ruins.

Now let’s get back to day 1 in Tivoli, once we arrived we took a little nap and once the heat toned down, we went to check out one of Tivoli’s main attractions, Villa D’Este. A 16th Century Cardinal’s Villa, with the best Italian garden and fountains you’ll ever see. I mean it could’ve been the time of day, with the sun slowly closing down on Rome in the distance, the fresh air, or the realization that we were towards the end of the journey, but it was an amazing feeling to walk through the endless fountains and gardens.

After that, we walked around the town of Tivoli, which is right on the peak of a tall hill, or small mountain, so there’s a lot of going up and down. You know any medieval/renaissance setting ever? That’s what walking around Tivoli felt like. After walking down a variety of streets we found ourselves in Piazza San Biagio, where we had a little aperitivo.

Day 2 was dedicated to visiting the amazing Villa Adriana, one of the biggest Villa complexes ever realized, we’re talking about 120 hectares. It’s literally as big as some towns that we visited on this trip, or that you ever found yourself in. Not being a major history person, I can tell you that it took them 20 years to build, and unfortunately, Hadrian didn’t see it finished, but he could still live in it, I mean 120 hectares.

One of the best things to see are The Thermal area because you can see some original stucco on the ceilings, but you need to pay attention to your surroundings. The Canopo, considered to be the man banquet area in which Hadrian and his guests would dine and enjoy shows. And Finally, the Teatro Marittimo, called like this by historians, because of sea-motifs around the room, but later discovered to be the apartment of the Emperor. The best thing about the Teatro Marittimo? It’s got a tiny moat so if the Emperor didn’t want to talk to anyone, he’d pull up the drawbridge and ciao ciao.

Day 3 in Tivoli and the last day of our road trip, was amazing just like all the rest of them. We woke up nice and early to check out, and went to Villa Gregoriana on the other side of town. I mean it’s a 15 min walk to get to the other side of town, so if you’re there don’t worry it isn’t going to take you long. Villa Gregoriana is literally in every scene you ever saw of Italy that is painted during the period of the Grand Tour at the end of the 18th Century when artists started visiting the country to find inspiration. Waterfalls, Ravines, Grottos, and a Roman temple overseeing the whole area. Beautiful.

Now as we finished our road trip, we had to get back and lucky for us we left at the time we did, cause there was a massive fire raging at the foothills of Tivoli. I mean it was big, and whatever you’re stance is on climate change I don’t care, but if we don’t start doing something about it we probably won’t be even able to visit some of the beautiful places me and my gf got a chance to visit. Because even though this is nothing compared to what is happening in California, we still need to take some action to prevent our natural habitat to burn up, I mean our collective History is on the line.

Enough politics, more travel. So we slowly got back to Florence, and you know what I’ve got to say? I might add a little post on Florence cause at least you’ll also have a list where to find all the itinerary. Hope you enjoyed the ride and let’s go back to talking about food and Italian Culture.