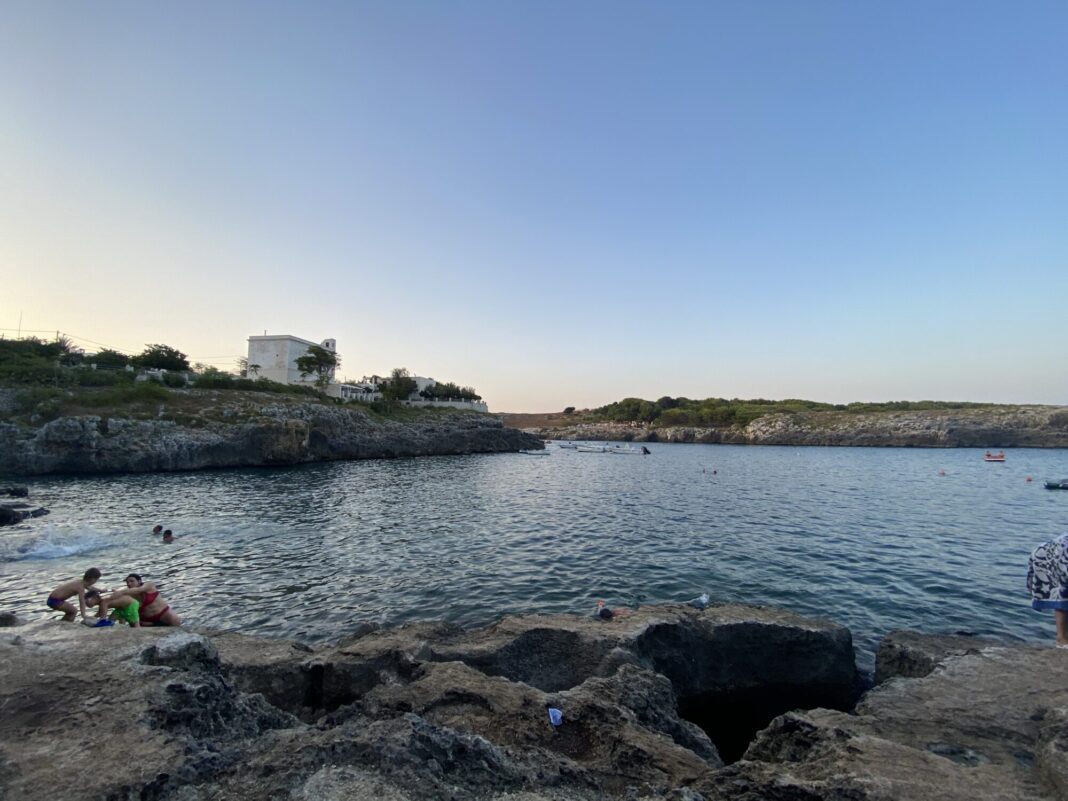 I left all of you hanging from the Sassi of Matera and now comes the biggest part of our trip, the longest stay, and also the longest traveled region of our road trip. Don’t worry though as this isn’t the end of our road trip vacation, as there are one/two more stops in the middle. The only way you’ll find out is by patiently waiting around to read them. In the meantime let me give you a little intro to this next region, on Puglia.

Puglia is no doubt the longest Italian region there is, I mean it stretches from the height of Naples all the way to the heel of Italy. And with it being so long it also has a variety of things to see. I mean we’re talking about some of the best beaches in Italy, amazing castles that date back to the 1200s, towns that look like gnomes built most of the houses, red canyons that contrast with crystal clear waters. I mean it’s too vast to describe in the intro. Don’t worry though cause with this being the longest stretch of the trip, it also means it’s the longest post, and I’ll try to delve as deep as I can on every place seen.

I’m going to divide the post into 4 major areas and dissect them as we go. The areas are Salento, Val D’Itria, Terre di Bari, and the Tavoliere Delle Puglie. We slept in every single one and we were amazingly impressed every time we arrived, between food, culture, and leisure, there is no way you couldn’t be.

Now let’s get into this road trip, enough of this general info.

We arrived in Puglia after a morning tour of the City of Matera, once we left the town was still super hot, so we hoped to find some fresh air towards the beach. Lucky for us our next destination was Torre Lapillo, the first clear beach we could reach in Puglia from Matera. I mean there is no doubt, but we found a great B&B right in front of the sea and once we arrived, we literally just went for a swim. The water was so clear that I could almost see my shadow, and there were fishes all over just minding their own business. Lucky for us we bought a snorkeling mask to enjoy the aquatic life. A great thing about Torre Lapillo isn’t just the amazing sea, but also the fact that you get to enjoy a nice and relaxing beach-town with a little central street with a bunch of restaurants, supermarkets, and bars, where after 9.00 pm no car can pass through, so that’s pretty chill.

After one night in Torre Lapillo, it was time to finally get to a place where we could spend at least some nights without having to pack and unpack our bags. This was Giuggianello for us, randomly found on Airbnb, close enough to all of the best beaches in the Salento, and one of the best Airbnb’s I ever stayed in. The town itself is the smallest municipality in Puglia, it counts around 1200 people as residents, and as you get to it, you feel like you’re in a Tarantino movie. The town has 2 restaurants, 2 grocery shops, one bar, and a pretty nice looking church in its main square. But don’t worry cause even with it being so small we found stuff to do.

The first day we arrived in Giuggianello the lady that owned the Airbnb suggested we go see Porto Badisco, a 10 min drive from where we were. Once there we found the water so beautiful that it was dreamlike. It was also past 6 pm so there was no one hanging around the cliffs, we enjoy a quick swim and had a light aperitivo at the one bar in town, because yes Porto Badisco is smaller than Giuggianello.

The next day was Ferragosto and usually, Ferragosto is the craziest day in Italy to go to the beach. With Covid being a thing this summer it meant that the beaches were going to be even fuller, as most Italians visited Puglia. So, we went to Castro, a beach town 15 mins from Giuggianello. Castro is amazing, it has a little castle at the top, and beautiful streets to walk down, and let’s talk about the water there as well, it was so clear it was crazy. Once there we were able to hitch a boat ride to one of the Grottos near the town for 15€ and had one of the best swims of our lives. Once finished visiting and swimming in Castro we decided that we needed to visit Santa Cesarea Terme, literally a 3 min drive from Castro. Famous for its thermal baths and the Palazzo Sticchi, that overseas….the sea.

You know about Baia Dei Turchi from one of our previous posts, so with me being there, I was like well, we have to go. It was the worst idea ever, so many people, literally packed, no type of social distancing, no type of security measures. So we left Torre dell’Orso, we left Baia Dei Turchi and we left Grotta della Poesia. We were lucky enough looking on G.Maps to find the Baia Dei Turchi natural pools, that no one cares about, so we chilled there and enjoy the rest of the day.

This one was a real quick stop on the way to Lecce, if you have a chance go to Galatina and visit the Duomo. It’s a 13th-century masterpiece, with original fresco within the church. Thanks, random priest of Castro for telling us to go there, cause we wouldn’t have known.

Our final day in Salento was dedicated to visiting Lecce. Called by some the Florence of the South, and you know what I’m gonna agree. It’s beautiful, and once there we met one of our friends that lives in Florence but is originally from Lecce. He was also impressed as the city was going through a major restoration process. We saw the Baroque Duomo, the Piazza di Sant’Oronso, the Basilica di Santa Croce, and ate pasticciotti like maniacs. Because when you go to Puglia you need to eat hot Pasticciotti.

Not exactly a town, it was the farm stay we were at. Owned by one of gfs friends, we spent three days of pure relaxation. A shout out needed to be made. It’s pretty amazing they even got there personal little church, that we got to visit.

Everyone knows Alberobello, even though you probably don’t know the name of this town. The town of the Trulli, the gnome-shaped houses used by countrymen when working the fields, originally from the 1600s they are one of those things that everyone in Puglia wants to see. Personal opinion, nice, but you’ll see a lot of Trulli even driving around the area, and there are too many people.

After Alberobello we decided to go to Locorotondo, it’s considered to be one of the best Borghi in Italy. A Borgo is a fortified town, usually very small. And Locorotondo is exactly that a small fortified circular town, it takes 5 mins to get there from Alberobello by car, and it takes another 20 mins to walk all around the center of it. It’s super cute and really worth the visit.

Another 10 mins from Locorotondo is Martina Franca, let’s say the big town of the area, where most people go party and eat at night. Lucky for us it was late afternoon when we went, so we didn’t suffer the mass influx of people. It’s a town with lots of little streets, and an amazing archway-ed central Piazza, you need maybe an hour to visit the whole town.

This place. Oh, man don’t even get started, it’s white, so people go there to walk around white streets on a high location, and you know what, it’s nice to look at in pictures and to get there. But god there were so many people, plus we didn’t even have lunch that day, it was like hell. Fortunately, we were able to eat at a certain point, but all the people around us pretty much killed the whole vibe. Definitely go, but maybe go during low season, in case you can only go in high season. Good Luck.

I was waiting to get here since we started the road trip, the port city of Trani. If you’ve been reading our blog for a while you’ll know that the town has one of the best churches in Italy. And I got to see it yaaaay. Plus at night the city is really lively. Other things to see are the Castle, the Jewish quarter, and the Villa Comunale (literally saved our lives from the heat of the day).

Now, funny little story, while we’re getting to Trani, our hotel in Manfredonia cancels our reservation. Why? We don’t know, but we find ourselves stuck without a hotel for a night. Luckily we find a place to stay in this town called Ruvo di Puglia. Man jackpot, the place we stayed in was nice, and we also ate great food in this little pearl near Trani.

The symbol of Puglia, Castel del Monte is one of the things you have to see to believe. An Octagonal castle built overlooking the Bari Lands. Built by Frederick II the Norman, no one knows why, probably for leisure, probably as a hunting lodge. But people think it’s all esoteric, because of the repetition of the number 8 in everything it has. We didn’t get a chance to visit inside, but even walking around it was amazing.

The last day in Puglia was in Lucera, and I have to say it was a bit of a disappointment because all of the things that we wanted to see where closed to the public. Even though Google had them open, so it was tres confusing. Luckily we still found a way to enjoy the food, so not all was lost.

This brings us closer to our conclusion, as Puglia kept most of our vacation time, but don’t worry cause we also stopped going back up. In front of Rome, because you know we can’t see the same thing twice, it’s bad luck. So we stopped in the beautiful city of Tivoli, one of my new favourite places. But you’ll have to wait at least until Tuesday to read up on this new city.