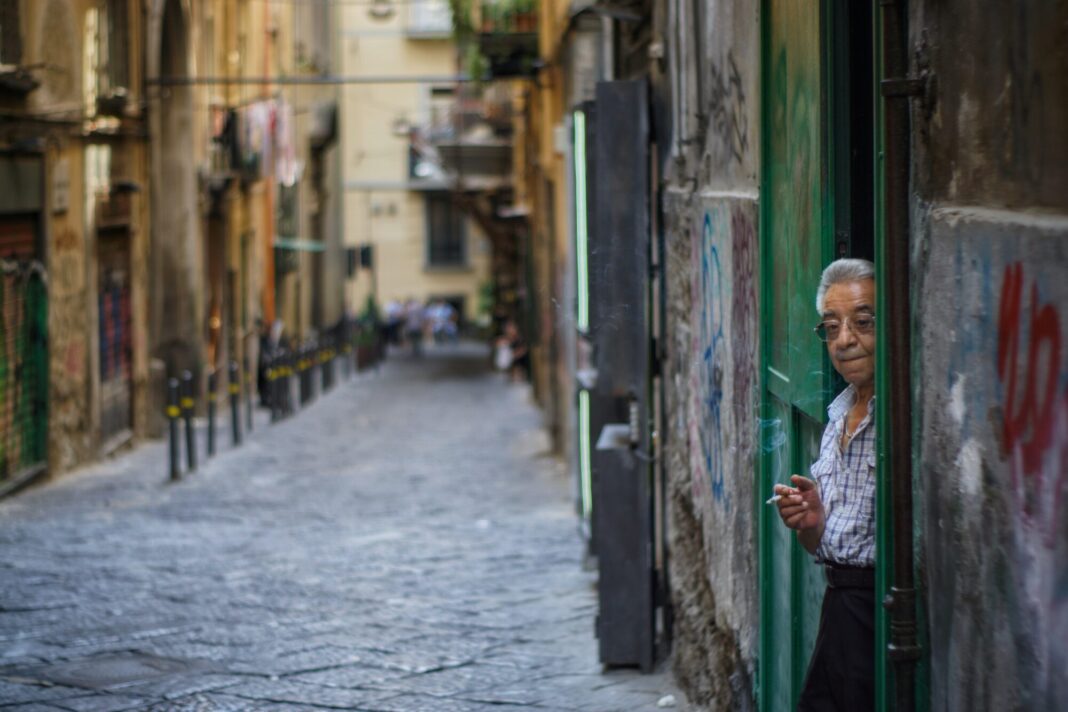 I left you hanging at the Vatican Museum, but that wasn’t where our journey ended, it’s no where near the end. After enjoying our last night in Rome with some friends it was time to wake up nice and early to leave the Eternal City towards Naples. This is where our journey got a bit complicated, because when it’s summer in Italy sometimes you get some freak thunderstorms that can be really scary if you’re on a highway. Luckily nothing happened to us, nor to anyone on the highway we were on. But this isn’t what you want to hear about, you want to hear about the beauty of Italy, you want to know why the saying goes “Vedi Napoli e poi muori” (once you see Naples you die).

We arrived a bit later than planned so we needed to rush a bit to see most of what Naples has to offer, and even though people tend to think food, neighborhoods and the Cristo Velato, that covers maybe 10% of the whole ordeal. Let me give you a little list below and than I’ll tell you what we were able to see. Keep in mind we were there for 3 days and I have my Nonna, aunts, uncles and cousins in the city so we enjoyed some family time as well, and pushed the pedal to the medal when it came to visiting, cause my cousins knew all the quickest ways around.

Now I’m pretty sure I’m still forgetting something in that list, but those are only the things that you need to see that don’t imply food and a nice coffee. Cause there are few things that beat an Italian coffee, and nothing that beats a Neapolitan coffee.

As you dream of your favorite Neapolitan coffe, pastry or pizza let me distract you with some mini snippets of info on every location we got a chance to visit. Keep in mind I kept the list divided by vicinity to one another.

You know those beautiful pictures of the bay of Naples? The ones that you see mad go check out the first flight out of wherever you are to go see the city? Well those come from Mergellina. Let’s say it’s the boardwalk, but Italian and a lot longer.

Didn’t go inside, but seeing it was amazing nonetheless, right at the end of Mergellina is the Castel dell’Ovo that legend says was built on an egg/around an egg, it’s a legend so things get a bit confused, the important thing is that there’s an egg involved ( Ovo means Uovo, that means egg) and if said egg would break the city would fall into ruin.

Actually called Castel Nuovo, it started off as an offshore castle to protect the city from Saracen invasions. Now it’s a museum you can visit.

Sanità is one of the most characteristic areas of Naples, you can’t visit the city without going in for a quick walk. You’ll find the Palazzo dello Spagnolo, a tres instagramable location, the Catacombs of San Gaudosio, Poppella (an amazing pastry shop), and it’s right beneath the Catacombs of San Gennaro. This year we stayed in Sanità in the Casa del Moncacone, it’s a really nice place in the heart of the quarter.

From Forcella to San Martino goes one street, and this street has various Vie and Piazze in the middle of it, but it cuts Naples in two. This is Spaccanapoli, the “Naples breaker” and when you look at it from any spot you can see the end of the old city in front of you, perfectly.

A beautiful monastery on one of the hills around Naples, the Certosa di San Martino didn’t have many visitors when we went, that meant we were able to enjoy it better than peak season. Massive courtyards and sacred art are all over the Certosa. It’s something you need to see yourself.

Forcella is where my dad comes from, and it’s also where my grandmother and family live. If you want to see a slice of life in Naples you need to go for a quick stroll down Via Forcella, I mean if you feel like getting into the center from the train station it actually is pretty doable. Also, Via Forcella is very close to the Duomo of Naples, the street ends right where you take the street to the Duomo.

The Cappella di San Severo is right in the center of Naples, it’s really small inside, but it has a very unique story behind it. The chapel was built completed by Raimondo di Sangro Who was the Grand Master of the Masonic order of Naples in the 1700s, one needs to right booms on this guy cause there is too much stuff around his name. Inside you can see the Cristo Velato one of the most important art works in the city.

It’s one of the main squares of Naples, one of those squares you’re going to pass by even if you don’t plan to. This isn’t a bad thing at all cause it’s also has two of the most beautiful churches of the city. The Chiesa del Gesù and the Convento di Santa Chiara. The first one has one of the oddest facade you ever saw on a church, that is because it was once a nobles palace and was confiscated by the Viceroy of the Kingdom of Naples once he found out there was a plan to assassinate him, plus there are so many legends regarding the facade that you can’t even imagine. Look at the stones and see if you notice anything odd. The Convento di Santa Chiara was one of the oldest churches of the city and was destroyed during WWII, inside you can see some of the original architecture and you can also visit its beautiful garden.

If you lived in Italy, you’ve heard of it on any News Channel around Christmas. It’s the Main Street where all the artisans that make nativity scene models work. It’s mad, lucky for us we’re in August and it’s low season, but the craftsmanship is amazing. Whenever you get a chance to go you should stroll down and pick up a Pulcinella for good luck.

Another historical quarter of Naples, right next to Via Toledo, the main high street of Naples, as in Sanità and Forcella, you’ll see a unique lifestyle and a very passionate place to enjoy an amazing pasta and patate: Nennella. The one thing about Nennella is that you don’t just eat very well, but the waiters go full Neapolitan on you, some people might find it rude and frustrating, but that’s the whole point to go there enjoy some nice food and a fully Neapolitan ride. Like literally if you find the right moment they’ll spin you around in the air like a pizza….literally.

The main square of Naples, the biggest one. Within you’ll find not only some beautiful statues, but also Palazzo Reale, the Viceroys residence. My cousin told me there’s a game you have to try at least once and that is to try and walk from the entrance of Palazzo Reale to the entrance of the Church in front of it, blindfolded, being able to walk between the statues in the middle of the square. It’s pretty much impossible I’m told, cause when we went there was some construction work going on so I couldn’t try.

Right after Piazza del Plebiscito you’ll find the Galleria Umberto, you probably know about the Galleria Vittorio Veneto in Milan, but this one has a very different style from it. It’s four corners are made from different stones and at the end of it you find yourself in Mergellina…look at that a full circle.

Now those are all the places I was able to visit, we were there for 3 days and as you could see from the list above you need a little bit more time to do the whole itinerary, and you know what? I might be forgetting something as well. I mean it was the capitol of the southern Italian states, so there is defo more to see. I mean just think about all the seaside locations there are as well. Naples is Naples and you need to get there as soon as the pandemic allows it.

In the meantime stay on board cause the next stop is the Amalfi Coast.