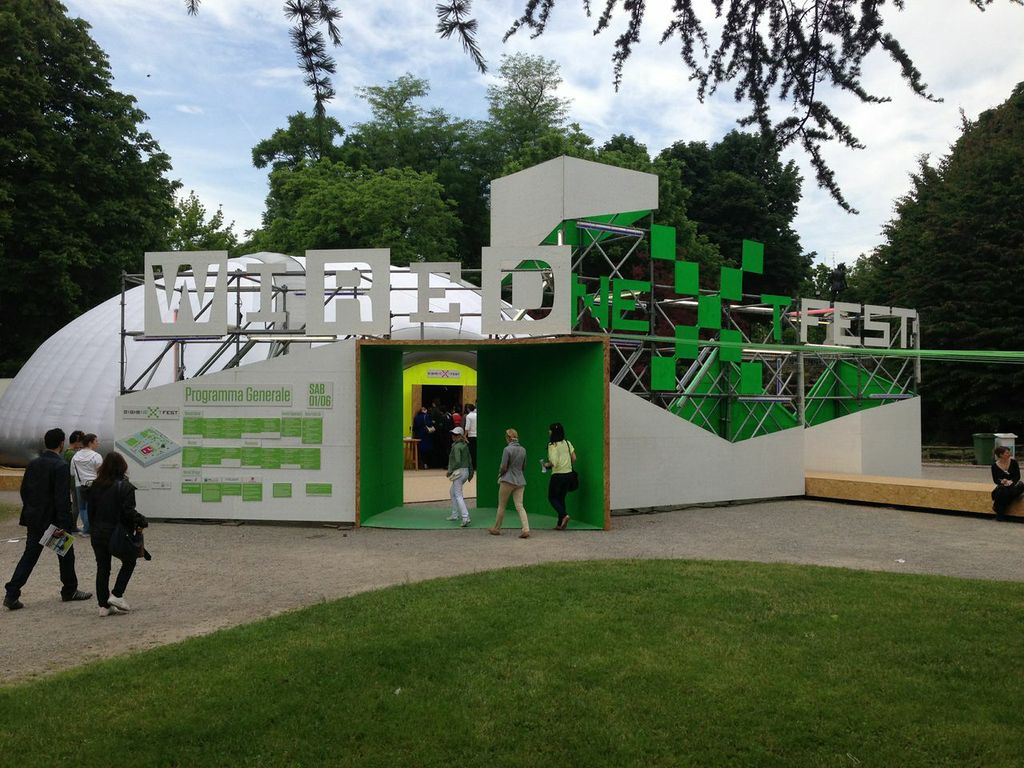 When one thinks of Milan, a lot of things come to mind: top of the line (and break the bank) fashion, the enormous duomo, and…technological innovations? While Milan may be a hardworking, time-is-money type of city, a tech fest was the last thing I expected on my weekend up north. Sure, I expected to hit the biggies, the ones you just cannot miss: the Milan Cathedral (The Duomo), the ostentatious Galleria Vittorio Emanuele, La Scala Opera House and the Sforza Castle (and truly,  do not miss these) but I stumbled upon an unexpected diamond in the rough: the Wired Magazine NextFest 2013 (link in Italian).

With the World’s Fair (link in English) coming to town in 2015, the city is gearing up for this big event in a big way. Not only is the city funding new projects to clean the city and make it more hospitable, the city is rapidly expanding its skyline by adding many new skyscrapers.  According to my tour guide, over 90 new buildings were going on up in the next 3 years, changing the skyline dramatically and planting Milan firmly among the big metropolitan cities and skylines.

Much to my surprise, as I was walking through Giardinni Indro Montanelli, I stumbled upon this mass of inflatable domes, balloons, and a cavalcade of sites.

Transformed into an Innovation Park, seven inflatable domes were erected, with the regular park’s planetarium and museum being used to showcase new technology. Suddenly emerged in this scene of innovation and wonder, I was like a kid in a candy store – unable to believe my luck! Walking in to the main “Wired Dome,” these dreams were quickly dashed as my crude Italian skills were definitely no match for the rapid vernacular being slung at me like machine gun fire by the top technological experts in Italy.

Disappointed that I wouldn’t be able to understand many of the keynote speakers, such as: the Chariman of the 2015 World Expo in Milan, numerous creative directors, authors, and scientists, I decided I would meander through the park’s “Dome Village” instead. And my discouragement (who would have guessed I’d have been upset about missing lectures?) was instantly replaced by the thrill of the future and all the cool sites!  From domes devoted to new-and-improved methods of renewable energy; electric cars; and the future of mobile connecting technology (phones, tablets and internet); to a children’s dome replete with a clown on a miniature bicycle, a woman on stilts, and tons of candy; there was plenty of wonder to behold. But the real exciting stuff was in the planetarium.

My first run in was with a robot baby. Yes, a robot baby, with a creepy face, trying to grab a ball out of a man’s hand.  Had the baby’s face not been completely terrifying and reminiscent of evil dolls everywhere, this would  have probably been even more amazing.  Alas, I was left more certain that I would be having nightmares than in awe of the fact that I just met a robot.

Exhibits galore littered the rooms, one of my favorites showcased the many uses and advances of three-dimensional printing, capable of producing almost anything from a computer image using different layers of material.  Fun Fact: they use this technology in Hollywood to recreate classic cars so they can shoot up fake ones instead of damaging the real ones!

With the main focus being on resusable energy and recycling, there were numerous booths promoting the use of recycled materials for everything from home insulation to flooring options. I wondered if my future house would be built out of water bottles and newspaper.

While the technology in itself was fascinating, the real experience was trying to absorb it all without hardly being able to understand it. Although a select few of the exhibitors did speak English, navigating the showcases and finding out just what I wanted to know was a roller coaster ride, but altogether, an amazing experience. Through pointing, hand motions, and  a pseudo-mix of English and Italian, I learned not just a great deal about advances in modern technology, but more about the most fundamental aspects of human interaction.

In Florence, it is not difficult, at all, to get along with just the basic Italian phrases. But at events that are not as touristy and geared towards locals, such as this one, it is definitely a challenge. With that said, venturing off of the beaten path and exploring is well worth it; not only do you get to enjoy such unique events, it adds tremendous insight into the culture, as well as helping you to expand your horizons!  Although the vendors and I may have been on two different wavelengths linguistically, with a smile and some pointing (and at times, great sound effects), we were able to understand each other enough to make sense of what was going on. Some well-placed gestures, an Italian brochure with lots of pictures, and boom! I can give you a crash course in sustainable, personal hydroelectricity.

It may not have been what I was expecting, but it was definitely an experience in Italy I will never forget!

Don’t be afraid to venture off and attend events that are Italian only. If nothing else, it is wonderful just to people-watch and soak up the culture. And hey, you might even learn a thing or two!