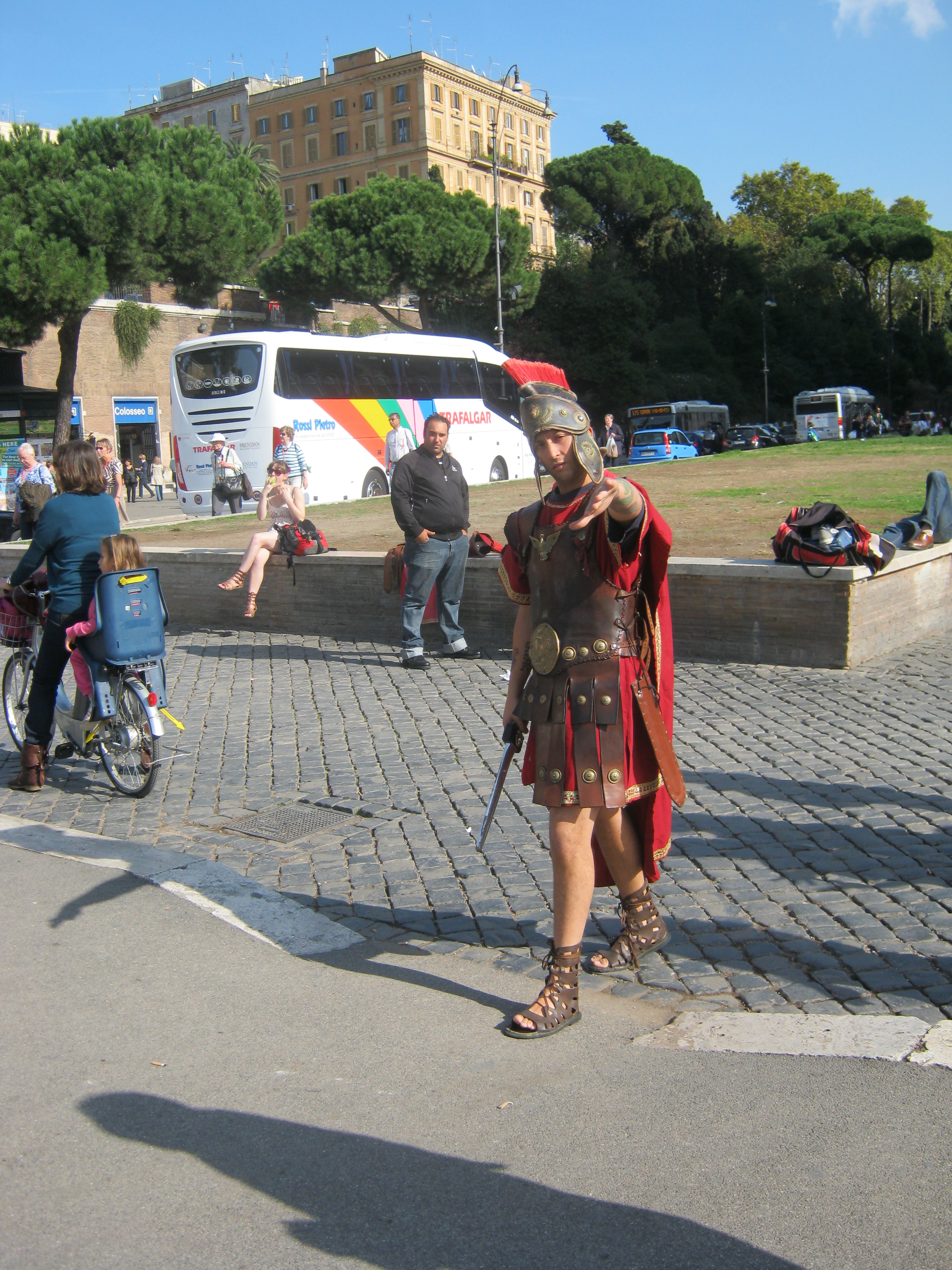 Studying abroad in Italy for 3 months, I knew I couldn’t leave here without visiting Rome. Rome is home to some of the most important and influential history in the world, the capital of Italy, and a huge city with so much to do and see in general. I finally made the trip last weekend, and it definitely was an eventful one! I’ll give you some advice to squeeze in all of the must-see sights while avoiding lines, tourist traps and ultimately making the most of your weekend.

Rome is huge, so taking the Metro is the easiest and cheapest way to get around! But do walk as much as you can as you will find new things and bump into cool places you wouldn’t think of. 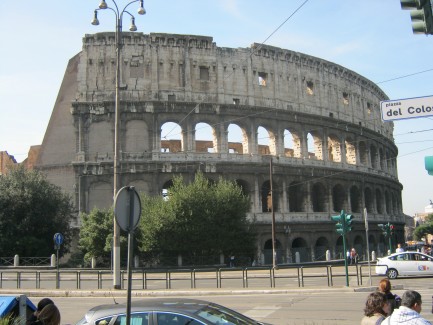 The Colosseum is one of Rome’s most popular, and in my opinion, most interesting attractions. This was once where brutal fights between Roman Gladiators and wild animals would brawl. Up to 55,000 spectators would cheer them on and eventually decide the fate of one of the warriors lives. This greatest amphitheater was commissioned by Emperor Vespasian in AD 72. If you want to go inside it, it is around 8 to 10 euros. I did not go inside it because I heard from many people it isn’t worth it since there is not much to see that you don’t already see from the outside. Although, on the other hand I would imagine it being cool to stand where so much history took place, so It’s your choice! Find this in the Piazza del Colosseo, not too far from the train station.

A little around the corner you’ll find the Ancient Ruins which display ruins of the Roman Forum, the Forum of Ceasar the Palatine and the Arch of Constantine. These can all be seen walking along the side. They belong to the Ancient Center where the capitol of commerce and politics were located. Palatine Hill is known to be where Romulus founded Rome in the 8th century BC. The Capitoline Wolf was made to remember Romulus and Remus and is on display inside the Capitoline Museums. Entrance to the Capitoline Museums is 12 euro or 10 for students with I.D.

Victor Emmanuel II’s Monument stands on Piazza Venezia and serves to recognize and symbolize the first King of unified Italy: Victor Emmanuel II. This building is a beautiful work of art, and massive in size. If you climb up the stairs and through the building, you can walk to the top of the capitoline hill where there lies a gorgeous view of Rome.

The Vatican is a must-see for Rome, but it can be a bit confusing as it is all in one broad location yet different lines and entrances. The Vatican is composed of St. Peter’s Basilica, The Sistine Chapel, and the Vatican Museums. St. Peter’s Basilica is the most sacred shrine to Catholicism, with St. Peter’s tomb buried beneath the church. The Papal Altar stands over the crypt where St. Peter is buried. The Altar is decorated lavishly and is a beautiful sight to see. The Vatican Museums house the Sistine Chapel and Raphael Rooms. This was once a palace home to Renaissance popes such as Julius II and Sixtus IV. On your way to the famous Sistine Chapel where Michelangelo single handedly painted the ceiling, you will go through a Gallery of Tapestries, The Etruscan Museum and many others. As I will explain later, a tour is suggested as you will learn the intimate details of these artifacts and save a lot of time. 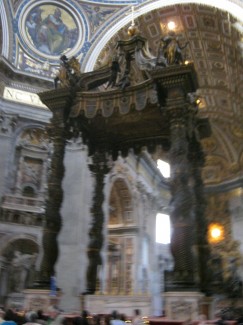 St. Peter’s Basilica is located in Piazza San. Pietro where the Pope comes every Wednesday, holiday and last Sunday of every month. On Wednesdays, he serves mass to the public at 10 a.m. On the last Sunday’s he blesses the crowd (and it is indeed a HUGE crowd) from his balcony at 12:30 p.m. All of the nuns, monks, priests, local devout catholics, as well as tourists gather around to witness the Pope.

Check out this video I took: Video of the Pope blessing the crowd in St. Peter’s Square (Just a short clip because I had to cut a lot of it out to fit into this post!)

To get to the Vatican take Metro Line A to Ottaviano San Pietro. Simply walk straight forward and you’ll run right into the square where a long line for St. Peter’s Basilica wraps around the square. I suggest getting their early, around 8:30 a.m. to wait in line as it moves quickly and you’ll be inside little after 15 to 20 minutes. If it is the last Sunday of the month, however, don’t bother going as it will be long slow lines all day no matter what time you get there for this and the Sistine Chapel because it is free on this day. Tours for both attractions are made extremely obvious, as they will go walking around pestering you as you are waiting in line or simply standing nearby. I do recommend taking one, especially if you are there on a holiday or last Sunday, because of how long the lines will be. The tours will provide interesting and helpful history to the art inside the buildings, as well as letting you skip these three hour long lines (maybe more). It is around 35 euros for a tour and skipping the line, however you get this for both St. Peter’s and the Sistine Chapel. With student I.D. some are 27 euro. If you choose to stand in the ever looming line, you can get in the Vatican Museums for eight euro’s with your student discount card, St. Peter’s is free and the museum inside is five euro.

Trinita dei Monti above. Visiting these steps and the church was one of my favorite things I saw in Rome. There was SO many people gathered around just lounging on the steps. It’s a great spot to eat a nice italian packed lunch with panini’s and wine. Just around the corner there lies the biggest Mcdonald’s I have ever seen! It has three levels and was packed in there like sardines. I’m not sure why so many people were in there when there is so much good authentic italian food to be eaten elsewhere… either everyone was craving a cheeseburger or they just wanted to see the size of this place! You can make your way to the Spanish Steps by taking the Metro Line A to the stop Spagna. There are also many designer shops decorating the streets surrounding the steps on Via Condotti (if you can afford these luxury items or would just like to browse). 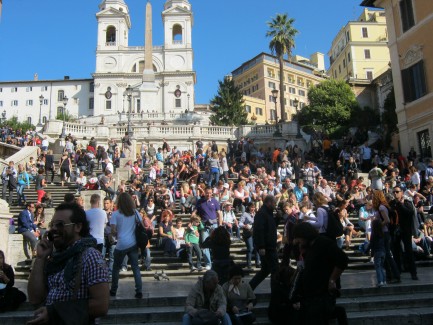 After a long day of sight seeing, some good traditional italian food is exactly what you need. As usual, I suggest my favorite website: tripadvisor.com to search for the best in Rome and to avoid any tourist traps. Me and a friend did this and we found a great place a street over from Ottaviano, called Vito e Dina. This was a small place but with an extensive menu with a smorgasbord of dishes we had never heard of. We hadn’t eaten all day so we decided to have a big meal. We ordered everything to share including: an appetizer with fried olives and more, two pasta dishes to share, chicken with peppers, and as for the last choice we took a daring suggestion from one of the waiters: Gils head with potato fry chips. Im not a big fish eater, I usually stick with salmon and tuna, but after gaining some courage we went ahead and ordered it. The Gils Head fish ended up being the best part of the meal! It was scary at first because they brought it out with the entire fish still put together, but thank GOD the waiter cut off the head and disassembled the bones for us. Delicious! This ended up being one of the best meals I’ve had in all of my time in Italy. At the end of the meal, as if we weren’t full enough, the waiters started throwing all kinds of free things our way! Maybe because we had ordered so much food and we are girls, or maybe because we were obviously enjoying it so much and maybe a bit tipsy from all the wine we drank, but it was a nice unexpected treat! First we were given a small appetizer, it looked something like three big fried raviolis, then came two shots of limoncello, and finally two shots more of vodka. We were too full to finish the free raviolis. But we didn’t leave after that, nope, not until we had a picture with the owner of the restaurant and his prized possession: his laminated newspaper of the L.A. Times with an article about his restaurant on the front page from 2009!!

Finally, after you are rejuvenated with your meal, head over to the Trevi Fountain in the Piazza di Trevi. This fountain is the most famous and widely known in Rome. The site of it at night with the lights, water and statues is beautifully tranquil. Many movies are made around this fountain, including the most recent “When in Rome” in which the premise of the movie is all about a girl who makes a wish in the Trevi Fountain and her chaotic life after. This fountain was completed in 1762 by Agrippa, and there are many different theories of the story behind the fountain. Popular tradition is to throw a coin over your shoulder into the fountain and make a wish: but not like any other fountain, the Trevi has more meaning than any other and (hopefully) your wish will come true!

**If you have seen all the major sights and have extra time to wander around, I highly suggest it! Head over to the Piazza Navona, the Camp de’ Fiori, and the Pantheon to explore. Walk through the winding inside and outside hallways of the Castle Sant’Angelo across the bridges, and climb to the top to see a miraculous view of Rome. **

To read more about the Trevi Fountain Theories try these sites below: