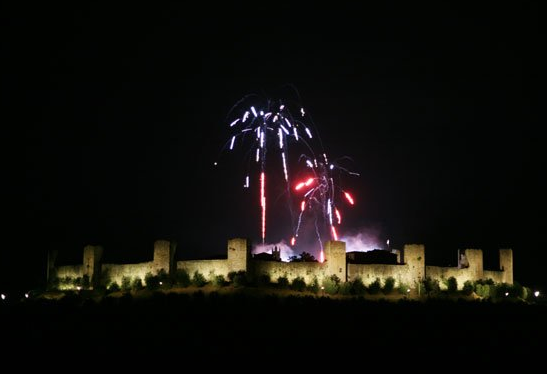 A blend of tradition and innovation welcomes the visitors in a great open-air spectacle whose narrative common thread leads them through heroic armed combats, pranks, intrigue, and merry juggling.

“War and Peace” is the original theme that will mark the attractions and performances of “Monteriggioni wears a crown of towers 2011”, organised by “Monteriggioni A.D. 1213” under the artistic direction of the Jobel Group.

As usual, the festival will be characterised by many entertaining reconstructions of military technology, daily life vignettes, and arts and crafts. A medieval world populated and animated by lively acrobats, musicians, jugglers, soldiers, shopkeepers, spies, pilgrims, innkeepers and merchants will be yours to discover.

During the first weekend, Monteriggioni will provide the backdrop to a pitiless medieval siege, re-constructed with great care and grandiosity to re-enact Florence’s assault on the Sienese stronghold in 1254.
And while the battle between Guelphs and Ghibellines unfolds at the edge of the enemy encampment in the plain below, within the castle, the besieged populace fears the worst.
The rumour has spread that some Florentine spies have penetrated the walls, blending with the crowd of visitors: treacherous plots are being laid to compromise the castle’s defence.
(The scenario will be presented on July 8, 9, and 10.)

The setting of the second weekend will be 1554, at the height of the Renaissance.
The air is filled with gunpowder smoke and the advancing imperial armies hold Monteriggioni in a vicelike grip. Charles V’s armies, led by the Marquis of Merignano, called “il Medeghino,” display their might in the plain in front of the fortress. Sienese soldiers, supported by the troops of the king of France, bar the enemy’s advance. A standstill lasts since a few days.
A hooded character roams the encampment of the besieging forces: it is Zeti, the commander of Monteriggioni’s defences. He bears a secret message for il Medeghino: he offers his aid to bring about the fall of the castle. (The scenario will be presented on July 15, 16, and 17.)