Home Florence Lederhosen, Half-Chickens, and Steins: From Florence to Oktoberfest

Oktoberfest was dope. It was like your local town fair, but 80 times bigger, and with a bunch of Germans in Lederhosen.  I booked my trip with Bus2alps student travel agency, which included transportation (a bus ride) to Munich and back, free breakfast, one free dinner, and the choice of camping out or staying in a hostel. I chose camping because it was the cheaper option (around €300 for 2 nights and 3 days). Our bus left from the Santa Novella Maria train station in downtown Florence, Italy at 11:30 p.m. Thursday night and we got to Munich early Friday morning. The 8-hour ride wasn’t too bad because I slept the whole way. They play movies, but I’d bring a pillow and try get as much rest as you can; you’re going to be out at Oktoberfest the entire day. 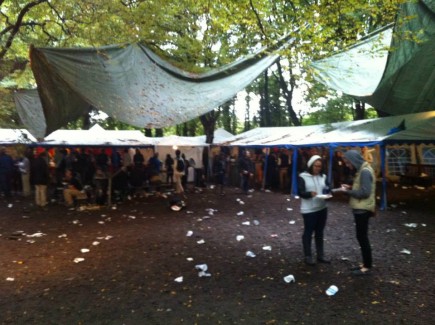 The campground was rugged, but a cool experience.  There were other travel agency groups there, like Stoke Travel all the way from Australia, and they loved to party.  The campsite had rows of tents, and a couple of buildings with bathrooms and vending machines.  The best part was the outdoor bar, surrounded by forest, that served unlimited beers for €10/day.  It was an amazing deal that I  definitely recommend… if you can handle yourself.  Inside the bar tent, you could buy traditional German costumes (lederhosen for men, dirndl for the ladies).  Of course, I bought lederhosen. They were €110 with the shirt: stupid expensive, and super tight. But Keeks (girlfriend) couldn’t resist how they flattered my physique.

Oktoberfest was really close to the campsite, just a quick bus ride and a hop on the metro and I was there in about 20 minutes.  It was raining almost the whole weekend, but I didn’t let that ruin my time.  A hat, gloves, scarf, jacket, and tons of beer were all I needed to stay warm.  Inside the festival, there’s an open-air carnival (complete with rides), outdoor drinking tables, and indoor drinking tents. Your goal is to get inside one of the giant tents. But since waiting in line takes forever (a couple hours), I spent my first day outside. You can get a humungous stein – about the size of three regular beers – for €10, tip included. And they sell half-chickens, which is literally a half of a chicken, for about €8.  Oktoberfest beer had 8% alcoholic content, a lot stronger than the 4-5% I’m used to drinking in the States. After a couple of hours, I found myself ready to go back and take a nap.

The great thing about camping was that when I finally woke up, there was a huge party going on at the campsite bar. Even though I probably should have just stayed in bed, I decided to get up and continue the festivities until about midnight, when the bar closed.

Many people complained about the cold that night. The campsite provides you with an air mattress and a sleeping bag, but you’ll probably need more to keep warm. I was equipped with my girl (definitely recommend having one of those) and an extra sleeping bag I had brought from Florence, so I had no problem. The day-long drinking session may have also had a positive effect on my slumber.

The next day, we were abruptly awoken by travel guides banging on pots and pans, reminding us to get up and go enjoy Oktoberfest.  After a quick breakfast (including a footlong hot dog) we headed straight to the festival. We wanted to get into a tent today, and the best approach was to get there early. Heading straight for the biggest and most popular tent,  HB (Hofbräu Beer), we got a premium spot in line two hours before the doors opened. When they finally did, everyone rushed in to find a table, pushing and shoving the whole way.  We scrambled to find a table and started ordering up steins. Inside the tent was a site to see. People everywhere, wearing all different types of traditional German clothing, were screaming drinking songs and cheering (“Prost!” in German).  Once in a while, a brave soul would stand up on the table and chug some of their drink.  If you finished, everyone cheered like you were a hero, if not, you were booed by the whole crowd. It was all so exciting, and being in HB was one of my most favorite memories. A word of advice: take your time and drink slowly. (Alright, maybe I didn’t follow my own advice, but I really should have.)

After about two hours, big German guys came up to the tables and started forcefully pushing people out the doors. I guess that means tent time was over? They probably wanted to make sure everyone waiting in line all day got at least some time inside. I stumbled out and somehow made my way back to the campground. I was done that night. I didn’t make it to the party the outdoor bar, but did get up to rehydrate and get some sort of pork burger from a vendor.

The third and final day, I got up and headed to the Dachau concentration camp to experience some history before I left Germany.  The camp was very sad but an incredible reminder of the past.

Heading back for our last hours at Oktoberfest, I realized that I had yet to go on a single ride. My girlfriend convinced me to try one, and I’m glad she did; it was my favorite moment of the weekend.  Once inside the festival, we headed straight to one of the less-crowded tents.  Just like I advised not to do before, we chugged a stein each (only because we were on a time limit) and then ran to the tallest ride, something like a super swing. Luckily the line wasn’t too long, and after a couple of minutes we were soaring through the air, spinning in a circle high above the crowd.  At this point, I realized that maybe chugging a stein wasn’t the best idea, but even that couldn’t ruin the amazing view. Don’t miss going on a tall ride! You get to see how big Octoberfest really is. Before leaving, we had time for two more half-chickens, a 2-foot hotdog and some french fries. Completely satisfied, we headed back to the station with just enough time to pack and grab a couple of beers for the long bus ride back.

Oktoberfest happens for 16 days, every year. If you’re in Florence (or Europe) during late September or the first weekend of October, and like beer and great food, you have to go. I’m very happy to have the little memory that I do of this wild weekend in Germany.