Home Folkore How do you Say Merry Christmas in Italian? 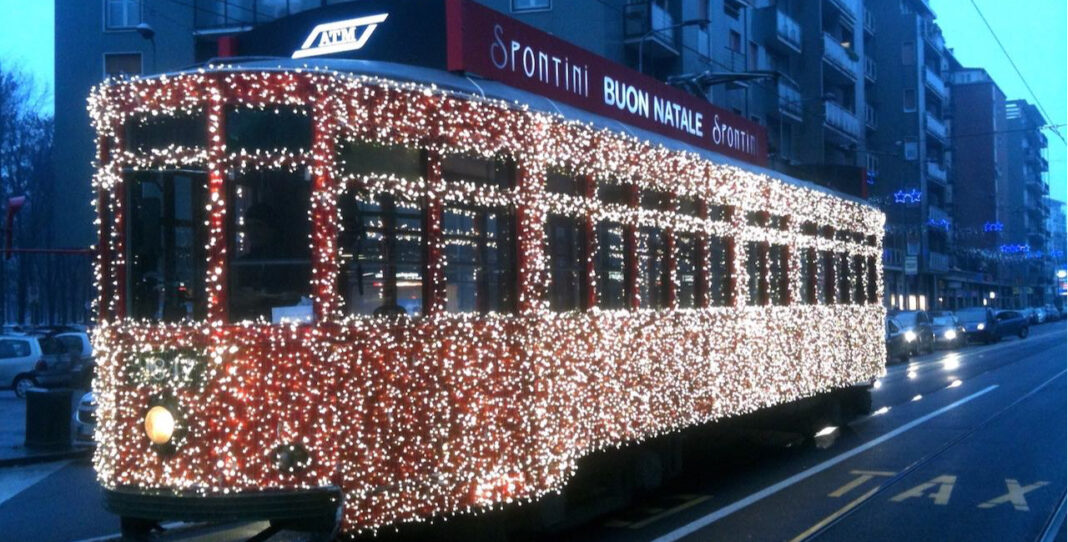 Welcome to Italy, where Christmas lasts a whole month!

But when does Christmas in Italy actually kick off? What does the jolliest season of the year bear? And, most importantly, who’s bringing the presents?!

All these matters – crucial for kids and shopaholics –  largely depend on where in Italy you are.

Yes, because still today, in the Christmas-tree-&-Santa-everywhere era, ancient Christian and traditional regional customs, rituals and festivities live on. And thrive.

How and when Italians get the Christmas spirit soaring

Christmas in Milan lights up on December 7th with the Festa di Sant’Ambrogio, i.e. Feast of Saint Ambrose, the city’s patron saint. Celebrations include a special mass, seasonal street market, and the opening of the opera season at La Scala Theatre season.

Aurelius Ambrosius, Archbishop of Milan during the 4th century, was an influential ecclesiastical figure of his time. As the story goes when he was a baby a swarm of bees flew to his face.They settled on his mouth and, instead of stinging, left honey on his lips!

Inventor of a renowned Advent hymn, which forever connected him with Christmas in Italy, he is also the patron of beekeepers and candle makers.

What happens on December 7th in Milan?

Holiday-clad Milanese flock to the Basilica di S. Ambrogio for a special Mass, and then follow the whiffs of roasting chestnuts and mulled wine to the picturesque Oh Bei Oh Bei street fair.

Named after the popular Milanese dialectal exclamation “how lovely how lovely” Oh Bei Oh Bei is a large market with hundreds of stalls selling Italian Christmas decorations, toys, and gastronomic treats. If you’re over for the holidays it’s a great chance to feel the Christmas glee!

But… what if you’re not in Milan? All you have to do is what another day, and…

Deck the halls on December 8th: the Presepe starts

Italian Christmas officially starts December 8th, a public and religious holiday which celebrates the birth of Mary, la Madonna – holy mother of Jesus. This is when Italians traditionally pull out their Christmas boxes, decorate the tree and build their household presepe.

What is a presepe ?

One of the most important, ancient and genuine Italian Christmas traditions is the presepe. Presepe or presepio is the Italian nativity set which renders the scene of the stable where Jesus was born. Virtually every Italian household has its own presepe, complete with figurines representing Mary, Joseph, Jesus (added on the 25th) and the Wise Men (added on January 6th), shepherds and animals. Life-size, often hand-painted or carved, Italian nativity sets can be seen in churches and city squares.

Meantime, and all through the season, you hear the Zampognari, traditional bagpipe players clad in sheepskin jackets, playing Christmas hymns on the streets.

And, naturally, see Italian shoppers run home with their treasures!

December 13th is Santa Lucia, i.e. Saint Lucy’s Day. This heartfelt ancient religious feast honors Lucia of Syracuse, a young woman martyr who allegedly brought food to the Christians hidden in the Roman catacombs. Legend goes she wore a candle-lit wreath on her head, to have both hands free and thus carry more food.

Celebrated as the Saint of Light throughout the boot, in the areas around Brescia, Bergamo, Verona, Mantova and Bologna lovable Santa Lucia brings children their Christmas gifts.

Yes, Christmas in Italy sees her candle-crowned whiterobed figure, and not Santa Clause, loaded with shiny parcels for Italian children!

Can you guess what December 24th, 25th and 26th – the feast of Saint Stephen – are mostly about?

Yes, the correct answer is Food!

Of course there’s Midnight Mass on the 24th and jolly getting-together with friends and relatives.

But above all it’s a whopping string of opulent meals… a 3-day Italian Christmas food jubilee.

The ladies play the leading roles at Christmas

So, as you see, ladies and girls play a very important role. They roll out the tagliatelle, roast the duck, and set a festive table. And bring the presents!

In fact, Santa Lucia isn’t the most important Christmas lady in Italy.

The real celebrity isn’t so alluring…

The most authentic, bizarre, picturesque and beloved Christmas gift bearer in Italy is la Befana, the Italian Christmas Witch. On January 6th, feast of the Epiphany, Italian children jump from their beds starry-eyed.

The scraggly, tattered gray-haired old Befana certainly flew in on her broomstick in the night, leaving stockings filled with gifts and goodies! Traditionally there’ll be candies and chocolate for the good kids and coal (candy coal!) for the naughty ones.

Christmas in Italy ends with a bang!

As the saying goes “l’Epifania tutte le feste porta via” – the Epiphany takes all holidays away. When Christian tradition celebrates the three wise men reaching the baby Jesus, festivities are off. January 6th is the last day of Christmas in Italy, and as such needs to be saluted properly.

In the morning Italian households are filled with play and lighthearted laughter. And children are allowed to dive into their goodies ad-lib. Later on in the day many families get together for yet one more sumptuous meal, and Italian cities feature spectacular exhibits and parades.

The Befana Regatta in Venice showcases dozens of oarsmen dressed like Befane competing on the city’s canals. And many a town has a real-life acrobatic Befana flying off the church bell tower!

During the Christmas season many Italians raise their glasses to their relatives, and fellow citizens, in worldwide “Little Italies”. Their contribution to Italian Christmas traditions with memorable parades and Dominick The Italian Christmas Donkey cannot be ignored!

How do you say Merry Christmas in Italian?

And a peaceful, healthy, wonderful New Year to you