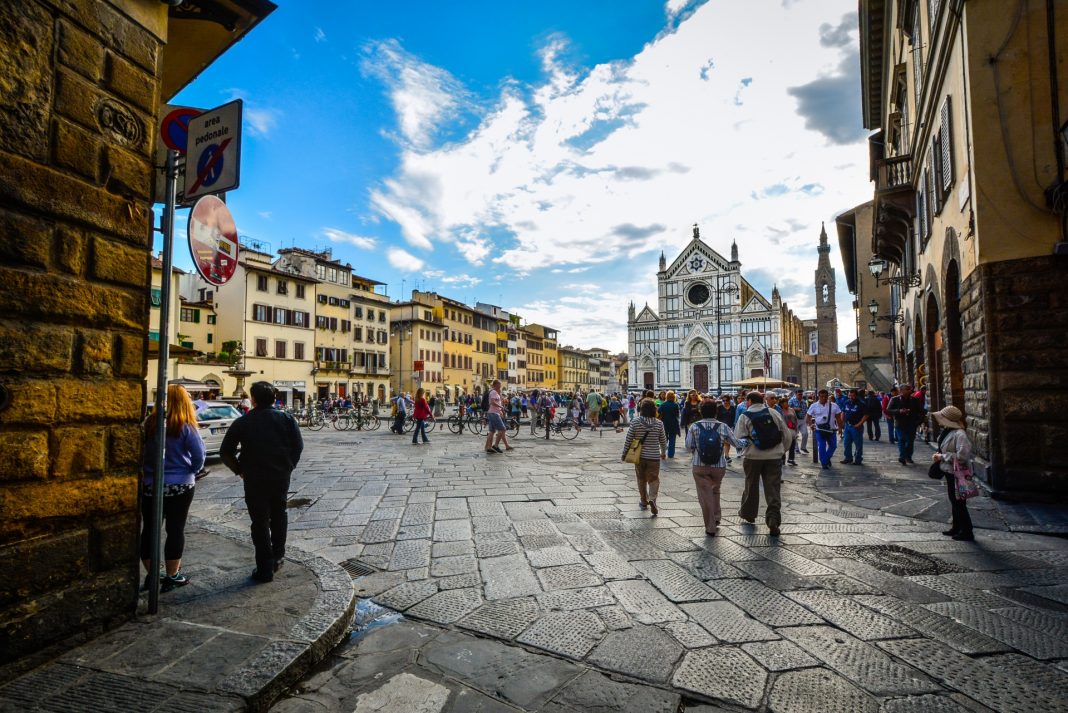 So you’ve been in Florence for who knows how long and you can’t think about another church or piazza, don’t even think about doing that cause today we’re giving a little rundown on Santa Croce, the second biggest church in Florence, otherwise called Basilica, this term is used as a way to describe churches that can also become, in emergency situations, the Duomo of the city. Now being that we live in a time of peace, this won’t be something that’ll be happening soon. 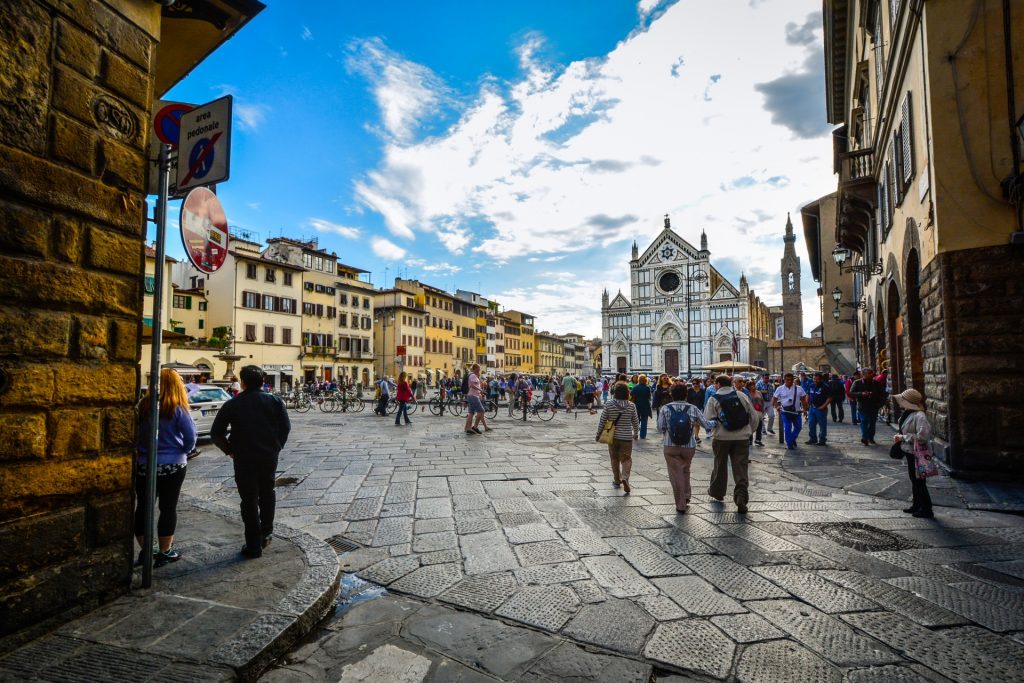 Santa Croce up until after the Renaissance was one of the limits of the city, you can see this from the fact that after the church of San Giuseppe the buildings start to have a “newer” vibe to them, and further down you arrive at the Viali that are in the place of the ancient walls of the city. So let’s say you’re looking for an apartment to stay in, keep this in mind and you might be sleeping in a 1200 house or in something built in the 1800 — Love how in this town new is 1800. Now that is on the side of the Viali, but if you look for the Arno (that’s the river) you can find the Biblioteca Nazionale, it’s crazy important because it holds within it the knowledge of Italy.

Now you know about the area, and you probably know why the church of Santa Croce is so famous, but most probably some people don’t. So Santa Croce is a Franciscan Church, and thus up until the 1800s it’s facade wasn’t all white and marble, but rather bland — if you have San Lorenzo in mind, then you can imagine what it looked like — and simple, as the vow of the Franciscan is so. Once inside the Basilica, you’ll notice tombs everywhere, this is because Santa Croce is Italy’s cemetery of brilliant minds, a bit like the Pantheon in Paris. You’ll find Galileo, Michelangelo, Rossini, Machiavelli, and a commemorative tomb of Dante Alighieri (the body isn’t in Florence, cause the city and Dante had a fair amount of beef).

Now usually when you leave Santa Croce you have a huge piazza in front of you, but not in this period. Oh, nonononono. Now we play Calcio Storico, the sport of beasts, you’ve probably heard about it from the National Geographic pieces, or the Vice Sports documentary, but we’ll give you a quick recap of the setup and the history.

So the tournament is comprised of 4 teams, each representing one historical quarter of the city: Azzurri of Santa Croce, Bianchi of Santo Spirito, Verdi of San Giovanni, and Rossi of Santa Maria Novella. The four teams compete to win a cow at the end of the tournament, you’re there reading this going wait what? A cow? No money? Well yeah a cow, cause it’s more of a symbolic victory than a monetary one, see when the game reached the peak of its fame, the town of Florence was being besieged by the Imperial Forces of Charles V, and after various months the city realised that in no way they could’ve been able to fight the military might of the Emperor. This moment of struggle gave them the idea to organise a game of Calcio Storico in the Square of Santa Croce, so that the Emperor from the hills surrounding the city could see the Florentines battle away with no care of the besiegement, and as the game came to an end and the winning team received their cow, the Emperor couldn’t believe that after all these months the city had enough resources to be giving away free cows (keep in mind this is the 1500s), and thus decided to leave Florence and its citizens alone. So that is why they give the team a cow.

So, why did I give you a whole spiel on Santa Croce? Well, because it’s San Giovanni on June 24th and that is next Sunday. So get ready for the final, that if you can’t see cause you didn’t get tickets, you’ll be able to watch it live at any pub in town or on RTV38 (local tv station), and after that you have to go to the river and see the fireworks, cause San Giovanni is also the day Florence celebrates its patron saint, thus we celebrate with men beating each other in the square, then give them a cow, and then relax with a nice firework show at the end of the day.