Today you will take a full-day tour in the green Umbria area and visit two of its most fascinating cities – Perugia and Assisi. Man has been living in this region for at least 200,000 years since the Paleolithic age and this is evident in the many archeological finds of the territory.Perugia was an Umbro village that later became Etruscan and the most important center in the Upper Tiber Valley. Perugia is today a thriving town with an important international university and one of the most beautiful squares in Europe, the Piazza IV Novembre. Steep streets pass through the ancient gates of the nucleus that was once the Etruscan center. In the center of the square you will see the beautiful Fontana Maggiore, a fountain built in the 13th century in order to bring water into the center via the acqueduct from Mount Pacciano. 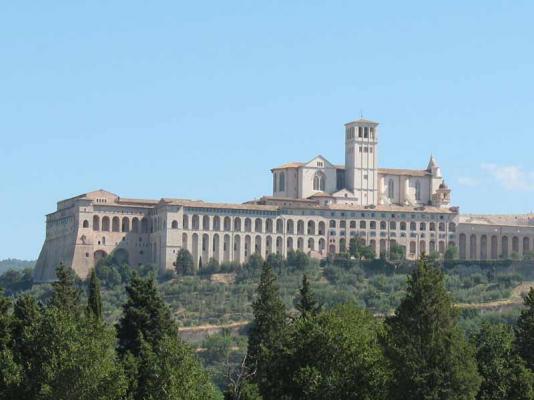 The fountain, one of the best examples of High Gothic in Italy, is formed by two basins and is decorated by the sculptures Nicola and Giovanni Pisano. One side of the square is taken up by the Palazzo dei Priori; this medieval building is now the town hall. In this square you will also see the gothic Basilica di San Lorenzo. Do you like chocolate? Perugia is the home of the Perugina chocolate factory. In October the town hosts a gigantic chocolate festival where you can taste dozens of samples. The town is packed with tourists in this period and chefs in the restaurants use their talents to invent many dishes using chocolate as the main ingredient.Your Umbrian excursion continues with a visit to Assisi.One of the most peaceful places on earth, Assisi is the birth place of the venerated Saint Francis. This quaint place built on a hill is made up of many, winding, stone-paved streets, and carefully restored houses. The more energetic of you might enjoy a steep walk up to the fortress. The views from here are worth the walk! In the main square named “Piazza del Comune”, you can visit the remains of the Temple of Minerva. This interesting place, an example of Roman architecture from the 1st century AD, is now a Christian church, Santa Maria sopra Minerva. One of the most beautiful sights in Assisi is the Basilica of Saint Francis. This is formed of two 13th century, one on top of the other. The stunning frescoes by Giotto and Cimabue are some of the most important in Italy. Saint Francis and his companions are buried in the crypt of the lower church. Other famous churches in Assisi are the Basilica of Santa Chiara, where St. Clare is buried, and the Santa Maria degli Angeli in Porziuncula is found at the foot of Assisi, slightly out of town.

You will love exploring the tiny streets of this town and looking at the many shops showing local handcrafts and religious items. Santa Maria degli Angeli is one of the largest churches in Christendom. It measures 126 meters in length and is 65 meters large; it rises to 75 meters to its dome. Construction was begun on March 25, 1569 and finished in 1679. The Basilica suffered considerable damage in the earthquake of 1832 and was rebuilt by Luigi Poletti. The actual façade is neo-renaissance and the portico was added between 1924 and 1930. The entire structure was built in order to enclose the “Portiuncula” which now stands inside the large basilica. 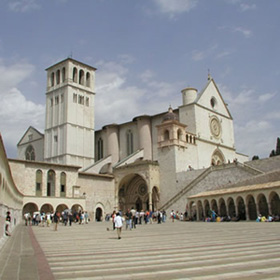 This very ancient chapel Portiuncula was venerated for an apparition of angels within, and was originally the property of the Benedictines of Subasio. It was located on a piece of land called the “Portiuncula” and this name was also given to the chapel. This is the chapel restored by St. Francis and it was here that he finally understood his vocation and founded the Order of Friars Minor in 1209. It was here that he lived, St. Bonaventure tell us “because of his reverence for the angels, and of his great love of the Mother of Christ” to whom the church is dedicated. It was also here that Clare received from the hands of Francis, the religious habit and so beginning the Order of the Poor Clares. Some of the rough stones within the Portiuncula were actually put in place by St. Francis who repaired the church. St. Francis died inside his beloved Portiuncula on October 3, 1226. Your driver will bring you back to your accommodations later in the day.

During your drive, you will get the chance to see some of the green Umbrian countryside and the many hill towns for which Umbria is famous.