Home Trip to Italy My trip To L’Aquila

Tuesday was the first anniversary of the earthquake that devastated the city of L’Aquila. During the Easter holidays, I was visiting the city, hosted by a group of volunteers who returned to town a year after the first time. 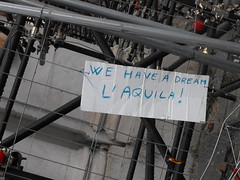 My journey started by the community of “Pile”, a part of the city, which hosted one of the tent city built by Civil Defence.
The meeting between the community and volunteers was something very interesting indeed hit my gratitude to these families.

After the traditional Easter Mass under one of the many tents that in recent months we have all seen on TV, I met Don Ramon who hosted us for lunch. The chat was last developments of recent months, returning to the homes by the earthquake, received aid needs for reconstruction of the small medieval church.
The afternoon has seen me through the city center, the epicenter of destruction, of particular interest are the artistic Collemaggio basilica, located on the outskirts of the city and the Dome of the few places in the rubble cleared. Leaving the town I headed towards the student’s home, where they killed some students.

The most interesting part of the trip was the dialogue with citizens. During the afternoon because I met a family with several children, who have told me that night. Naturally tell their events, the months that are seemingly endless, but mostly I hit the sentence of a naive child watching the city from the window said “that night you could see the smoke ..” (Caused by several crashes).

I decided to tell you this trip, because Tuscany is one of the Italian regions from which they left many of the volunteers and is easy to join the Union.