Amongst the numerous and magnificent palaces of the sovereigns of  Tuscany , that of Pratolino is acknowledged to be most worthy of the traveller’s attention.The hand of nature had prepared the elements, that of the artist had only to reduce them to shape and symmetry. These woods composed of firs, laurels, and other ever-green trees, 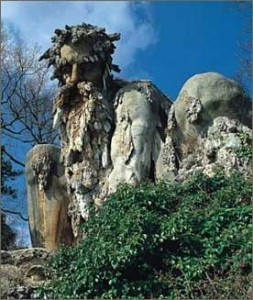 seemed the asylum of perpetual spring.

To provide for the pleasures of the chase and angling, the park was stocked with wild animals, and the waters were filled with fish of every species. The grottos of Pratolino are situated in that part which is exposed to the south. One certainly cannot too much admire the brilliancy of the interior decoration, which is nearly the same through them all. The wall and the vaulted roofs are ornamented with stalactites, madrepores, marine plants, corals, shells, and mother-of-pearl; and all those objects are mingled with paintings in Mosaic.

Everywhere one sees statues of marble or of bronze, which cast streams of water into basins of marble or of gilded lead. These waters, by secret passages, flow beneath the pavement, and escape into the gardens, where they are again applied to a thousand diffirent purposes. In front of the castle rises the colossal statue of the Apennines. The style is grand, and the character of the head is perf1ectly suited to the subject; his bushy temples brave the storm, and seem covered with a hoar .frost; his hair descends like icicles upon to his large shoulders, and the locles of his beard resemble stalactites. In order to add to the extraordinary effict of this Colossus, a sort of crown is placed on his head formed of small jets d’eau which fall upon his shoulders, and rolling over the whole figure make it sparkle in the rays of the sun. This beautiful place, now almost forgotten, attracts only the traveller, whose affiction for the arts prompts him to search for them in the midst of the ruins, which the hand of time and the negligence of man have accumulated. 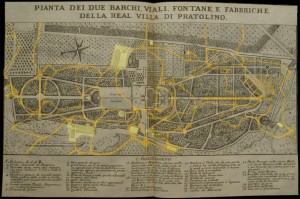