Home Florence Under the Tuscan…Run!

Summer is officially over here in Firenze and I’ve just realized that September has gone away  so fast.

I’ve always believed that this month is like the “Monday of the year”, as I’m always  full of good intentions and resolutions. But this extended summer made me forget about that and now I incredibly found out that it’s already “Tuesday” (for me and all people for whom the correspondence September-Monday make any sense).

That’s why I just hurried up to put in practice the intention that is almost always on the top of my list: make more sport.

I googled “jog Florence” because I wanted to have some tips about favorite places for joggers (or sympathizer in my case, since my long absence from the racetrack), but I actually found out something I didn’t expect.

The Tuscan Run sounded like a morning jog + a guided tour in the city.

It was something I’ve never heard about, although my assiduous attending of touristic events and activities. I e-mailed these guys and I just found out that the activity was one of the new proposal of a renowned bike tour agency in Tuscany and that it was spreading quickly due to the thing’s novelty.

In practice, you follow the tourist guide who runs ahead you in the historical center and you listen to the speech in the earphones. So you can mix workout with a lesson of history and anecdotes from the guide.

It sounded nice so I decided to give it a try. The tour is much cheaper than the others because it involves a very few human and material resources. I just wore the usual clothing I would use to go for a run (if I did!) and I showed up on time on the early morning at the meeting point. 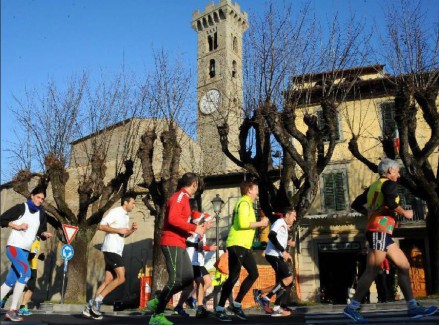 I must say that the tour was so much fun. The run was performed at the right pace and listening to the guide was much better than listening to music.

Learning something new makes your jogging much more playful and enjoyable. I’ve already noticed, when I used to go running back home, that if I went with a friend and chatted every now and then it turned out to be much easier, because talking helps you distracting and forgetting about the strain, but above all it helps you maintain the right rhythm in breathing.

Our sport-tour guide Lucia probably knew that very well. The pace was definitely affordable for people like me who hadn’t made exercise since long.

I am going to do it again, because they told me that the route can change every day and may be customized according to the group’s taste. We ran along the pretty alleys of the center, in Santa Croce neighborhood (wow! I didn’t know that Florence had a hidden Roman Amphitheatre, buried below Renaissance palaces), but also along the Lungarni, to breathe some fresh air. At the end of the tour I did not expect I could have made running for so long!

The speedometer of the guide marked almost four miles!

I was proud of myself.

I think next time I will choose the subscription: three runs for a reduced price, and each time a different path.

The guide told me that once a week they also go to Fiesole. I think this tour is brilliant, I had never thought of being able to mix sport and culture: but Florence can be also that.

I definitely recommend it. But, wait, I was just forgetting the most important part. At the end of the tour the guide took us (all sweaty and panting) in a very chic Florentine pastry shop that I had  noticed a few times in passing by, but I had never entered before.

It was a surprise: the cappuccino and pastries, which I love, were delicious. 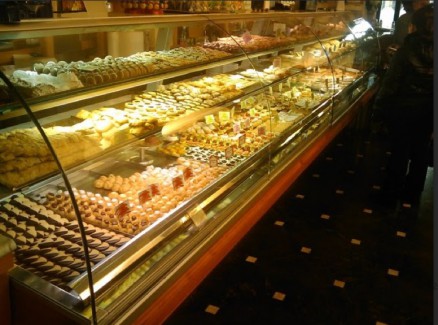 The choice was wide and a nice breakfast was absolutelywell deserved at that time. I started the day with a better mood and this tour encouraged me because  made me realize that with the right attitude I can handle what I haven’t done for a long time.

I would recommend it to all lazy guys like me but also to those who run regularly, to add an extra  touch to the usual routine, and to learn something new. The explanation of Lucia was in fact fun and full of interesting news, mostly unknown (totally different from the usual sightseeing tours!).

We were six in the group, plus the guide, and there were two professional racers, who were not disappointed at all. Must try.

The Tuscan Run is made every Monday, Wednesday, Thursday and Sunday from 7.30 a.m. till  approximately 9 a.m. You can book the tour or ask a question here:
http://www.ibikeitaly.com/runtuscany/The-Tuscan-Run.page

The single ticket is 20 € but you can book a membership card for 45 € (three times at your choice).