Home VOICES OF THE VILLAGE An interview with... The Fabio-lous Fashion of Food! 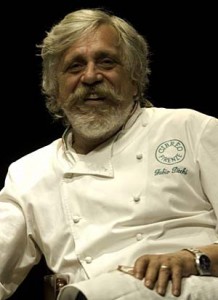 This imagery is as part of the fabric of the nation as is the cappuccino, the vespa and la pasta fresca; often combined into one stereotypical image of an immaculate businessman sauntering down a cobbled street on a brilliant red vespa, strolling into the bar opposite the office for a coffee and putting his order in for the linguini on the menu for lunch.

Another of Italy’s inherent images, projected and promoted as much on an international level as within the country itself, is of course food.  An inescapable celebration in everyday life which relates to such a base human instinct and sense of pleasure that taking time to appreciate the food Italy has to offer is difficult to forgo.  Try and justify the concept of a fad diet and it will very often be seen as an insult!

The more time I spend here, the more I realise what an important role the character of Italy’s food plays in the culture of the nation both in personal and business life, it too taking its place in the creative arena. 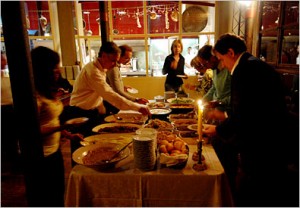 Enter Fabio Picchi, the white-bearded “personaggio” of the St.Ambrogio district in Florence and proud owner of the triumphant trio of eateries located here, all within a stone’s throw of each other.  Café Cibreo, Trattoria Cibreo, Ristorante Cibreo as well as the wonderful Teatro del Sale, a divine theatre-cum-restaurant with inspiring and entertaining shows and where dining itself is a theatrical display; the chefs leaping out from the wings and reciting their menus to an eager, humble and hungry audience.

There is endless material to explore here but I want to focus for now on one aspect in particular – the chef himself.  (Needless to say this place merits a visit but you will need to book in advance to catch a show once you have become a member – Teatro del Sale)

A career dedicated to creating recipes and designing dishes, many hours spent in chef whites…!  Have you ever thought how much time a chef spends in those ever so familiar chequered trousers and white jackets?  Originally designed to show up all the dirt, to resist against the heat of the kitchen, and for ultimate comfort, chef attire has seen relatively little development over the years apart from upgrading fabrics.  You can imagine therefore how attached to their clothes a chef can become and how much they naturally become a part of defining their image.

This is demonstrated beautifully by the theatrical chef in one of his recent projects.  Last season saw the launch of a range of clothing by Fabio Picchi known as Teatro del Sale Emporio, using as a theme the style and comfort of chef clothes!  In the following interview Fabio reveals some of the story behind the chef’s iconic outfit and his Emporio range:

– When did you buy or wear your first chef whites?

12th June 1979!  I’d asked a restaurateur friend of mine if I could work in her kitchen to start to experience catering for large numbers.  Within three months of that day (on 8th September of the same year) I opened “il Cibreo”.

– Could you guess how much time you have spent wearing them since that moment?

This September I think I will have hit the 100 thousand hours mark!

– Do chefs get attached to their whites say as a footballer would to his favourite boots?

Absolutely!  It’s like wearing a uniform, a ritual, they give you the sense of belonging to a group.  You get fatter in them and slimmer in them; they can get stained completely beyond repair or stained with the signs of having emerged victorious from a battle!  They are pure and candid, on an endless journey like the “Candide” of wool.

– Have you witnessed much change / development in the fashion /style of chefs’ clothing?

Certainly, although in my opinion the true chefs’ clothes are the traditional whites.

– Can you explain briefly the idea behind the range of clothes in the Emporio line?
The design of the jackets took inspiration from the Greek Orthodox convents near Salonicco where the able Orthodox monks recounted from memory and translated into written texts the heritage of an overwhelmingly female art of cookery passed through numerous peoples and cultures; Turkish, Jewish, Middle-Eastern, the Mediterrannean north and south… The praying monks wore black robes while the monks who cooked used to wear white robes.  Even the famous chef’s hat has origins in the hats of the Orthodox monks.  They became so skilled that they were taken to cook for the courts of Europe and hence establishing the image of the professional chef dressed in that way.

– What has been the response from the public, are they selling well?  Are the customers members of the public or only chefs?
They’re selling very well.  In only a few months we’ve sold over 500 jackets, giving people an object that will remain valid for at least the next 50 years; offering a sense of stability in a world that projects itself in a constant state of movement and change; making the most of tradition to face the future, even if it is simply by providing a durable object of comfort.

– How about the feedback from the chefs in the Cibreo family – do they all wear them and what do they say?
Many have actually bought the clothes, but to wear outside of work too.

– Do you have plans to develop the range – shoes, aprons, hats?
Yes, there are plans but nothing immediate.  We are currently working on a hat and an apron, and who knows, maybe in a few years we’ll also offer shoes!  We are already very proud of the trousers in the range which give us a lot of satisfaction.

– For my fellow Brits, what do you honestly think about English food?  Could you describe it in one sentence?
Your cuts of lamb, your roast beef, your strawberry tarts and Cornish pasties spring to my gastronomic mind.  I remember eating the most extraordinary eggs and bacon with an absolutely fantastic baked loaf of bread in the outskirts of London…every country has its whys and hows!

– If you had to pass on one piece of advice to aspiring chefs…?
Eat, eat, eat!

You can view Picchi’s designs from soft navy chef-style jackets made of 100% cotton, lined with velvet detail to loose fitting cotton trousers with the recognisable black & white chequed material “pie de poule” lining the pockets and adjustable hems, to t-shirts and even ties on display and for sale at Teatro del Sale, via dei Macci 50120 Firenze tel: +39 055 200 14 92 and on-line at www.edizioniteatrodelsalecibreofirenze.it

Prices range from €110 for men’s and women’s aptly named “Memoria del cuoco” trousers and €125 for the comfortable jackets made with “Segreta memoria di cucina”.

If dressing the part inspires you to get creative in the kitchen you can also find a selection of wonderful Tuscan products and cook books for sale there too!

I’m holding out for a chef’s jacket that can do the cooking for you!  (Fabio admitted to not knowing if such a thing exists but would also like to get hold of one if it does!)

Brexit and the city….