More than 120 years after its 1877 closure, the ‘English Cemetery’ of Florence had fallen into a derelict state. Tombstones were unstable and cypresses were falling.

Permission for a restoration project was officially granted in 1997, when the city of Florence also approved 500 new loculi (burial plots) for ashes or small caskets of bones. The cemetery re-opened, albeit in a state of disrepair.

Since 2000, Julia Bolton Holloway, a renowned scholar and custodian of Florence’s English Cemetery, has fought to keep the gates open and restore the original charm of a place described in the nineteenth century as ‘a most beautiful garden.’ Over the past 10 years, she has supported the site through difficult times, rescuing it from ruin and threats of permanent closure. Founding the Aureo Anello Association, she launched a campaign to save the cemetery, and with the support of worldwide admirers of the cemetery, the Friends of the Cemetery was born, and members set to work on a long-overdue restoration.


One of Holloway’s first challenges was to convince the Swiss owners that keeping the cemetery open would be economically viable, so she began to gather requests to purchase lots. She also paid for handrails at the main entrance staircase and for the restoration of several tombs. Because she could not personally support the restoration, she began to seek donations. To do that, raising awareness is paramount. 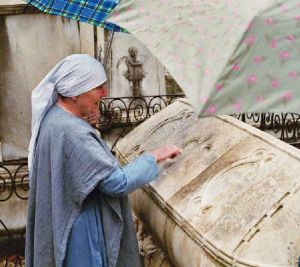 To put the cemetery ‘on the map,’ Holloway has used not only her contagious enthusiasm for the site and her powers of persuasion, but also her skills as a scholar. In 2005, she created a Wikipedia entry and an Internet blog to support the Emergency Appeal for restoration of the Cemetery. The oversight committee is impressive: in addition to film director Franco Zeffirelli (Tea with Mussolini), members include the Brontë Society, Browning Society, Dylan Thomas Society of Great Britain, Trollope Society, Gabinetto Vieusseux Centro Romantico, Regione Toscana, British Consul General and Gerardo Kraft, president of the Swiss Reformed Evangelical Church (which bought the land for the cemetery in 1827)

The projects on Holloway’s to-do list include repairing tombstones; preserving the nineteenth-century ironwork and gates; creating a park facility; stabilising the bases of tombs; repairing the north wall; laying new pathways to enable visitors to reach more graves safely; and replanting the gardens with shallow-rooted native and non-invasive plants.

To continue to raise awareness about the cemetery, Holloway has invited groups to stage events there. On May 23, for example, a group of second-year theatre students from the Tedavi Production Company performed E. L. Masters’ Spoon River Anthology amidst the graves, reciting epitaph monologues as the public walked between them. All donations went to the Emergency Appeal.

The effort to save the ‘Overseas Poets Corner,’ as poet laureate Andrew Motion once called it, includes not only Hollway’s tireless work but also the contributions of private donors, along with the cemetery’s earnings as a burial site. Some friends adopt a tomb and pay to maintain its garden. No gift is too small, Holloway notes. (Contribute to the restoration of the English Cemetery with the PayPal link on the Aureo Anello Association website: http://www.florin.ms/aureoanello.html.)
In addition to monetary donations, Holloway, requests plants: roses, plumbago, daffodil bulbs and any English flowers with non-invasive roots.

Joëlle Edwards is an English event and wedding planner, working in exclusive venues across Italy. She recently moved to Florence from London after having lived and worked in Switzerland, Palermo and Barcelona. She’d like to sing like Fiorella Mannoia, write like Andrea Camilleri, dance like Ginger Rogers and cook like zia Anna Maria! You can reach her at ciao@joellemarie.co.uk.