Home VOICES OF THE VILLAGE An interview with... Earley doors with Sting in Florence! 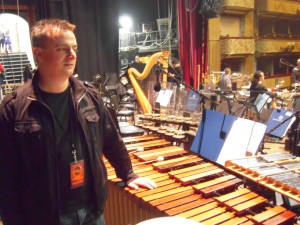 The English star of Tuscany was recently in town and the buzz of excitement in Florence was tangible.  Teatro Verdi, covered in posters of the sultry visage of Sting, advertised his one date in Florence on 25th October as part of his current world tour, with an entire orchestra.  I went along to the sound check, to see the man in action, and to chat to the Orchestra Percussionist, and personal friend, Kevin Earley.

Armed with a guest pass, and slipping in the side door of the theatre, I enter the beautiful auditorium and take a seat.  Sting’s calm voice fills the theatre as he breaks towards the end of Sister Moon “How can I make it a little more pointy?” For a second it seems he is asking me, the only person sitting in front of him, and I shift slightly in my seat…but the reassuring and faceless voice of Howard the sound guy booms some suggestions at the stage crew.

Sound check is a smooth 20 minutes, sampling only a few tracks including When we Dance and Faith and little needs adjusting.  Up on stage, in coat and scarf, and with harmonica in hand, Sting is totally relaxed, resting on his tambourine stand.  The 45-strong orchestra behind him, which Sting calls ‘the biggest band I’ve ever had’ also appear very much at ease; there are jests, giggles and dancing, but the notes are being hit.  It’s like watching a group of friends jamming together, but effortlessly producing a totally gorgeous and perfect sound.  They are clearly all enjoying themselves.  As an event planner, I can’t help but think of the logistics involved with touring 4 crew sleeper buses, 9 articulated trucks for equipment, 2 buses for the orchestra (although they mostly fly) and Sting’s private jet! 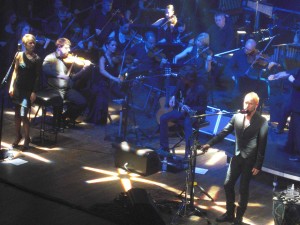 “We’re well looked after on this tour”, admits Kevin as we cross the road to Ristorante Il Teatro in front of the theatre.  “We normally have a catering company on board but tonight in Florence we have this place at our disposal” and he opens the door.  In a matter of minutes the entire restaurant is overcome by over 60 crew and musicians, hungry and ready to stage one of the most awaited gigs of the year in Florence.  Sting enters, relaxed and happy as he glides through a room full of talent and passion.  The waitresses are on an electric charge of energy as they dart between tables and playfully use the band technicians’ walkie talkies to throw orders between staff and kitchen.  Outside too is a flurry of activity as eager fans arrive to snap shots of the posters.  Little do they know that right behind them, only a few metres away, the man himself is looking out at them through the window while finishing his pre-show snack!

Kevin and I order a bottle of vino rosso…and looking around, we realise that apart from one other violinist, we are the only ones drinking wine..!

“If someone had told me when I was a student that I would be touring with Sting, I would never have believed them” he says in all sincerity.  The music world however has always featured in some form in Kevin’s life.  His father had been a singer guitarist and his grandparents had owned an independent record shop in London, which he still vividly remembers strolling around for hours.  After his voice broke at 14, Kevin switched singing in a choir for the social scene of a local youth orchestra, where he tried his hand at percussion.  He later studied at The Royal Welsh College of Music and Drama and is now Principal Percussionist for the Royal Ballet Sinfonia and a regular guest of The Royal Philharmonic Orchestra.  Occasionally he swaps the classical scene for the world of rock, most recently touring with legendary rock band Spiritualized (www.spiritualized.com).  “Although the touring and travelling element is similar, it’s quite a different world.  You just need to take a look in the dressing room fridges and the ratio of Peroni to Perrier!!”  Kevin recalls the surprise at being supplied with onstage beers during Spiritualized shows, but adds that it wasn’t hard to get used to!

Asked if he’s insured his hands, like footballers insure their feet, he looks down at his hands cradling a glass of Nobile di Montepulciano…“The bonus of being employed by the Royal Ballet Sinfonia means that I get any kind of treatment paid for.  I broke a leg a few years ago and was sent to the Royal Ballet physio department.  Suddenly I was surrounded by ballerinas being massaged…brilliant!!”

Working with Sting has been a great experience.  “I admire him as a musician.  He is a hugely talented singer songwriter and has incredible stamina.  Every night of the tour he performs a three hour set with only one small break, no miming, and he nails it every time.  I don’t know many other artists that can do that.” 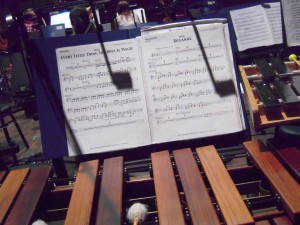 And what’s the master like as a boss?  “He lets us get on with it really, making the odd suggestion every now and again, he’s very laid back; earlier on, I was chatting to him about the wine he produces on his property here in Tuscany, and more importantly if he’d brought any along for us to try, he said he’s drunk most of it!”

Testament to his openness, during a previous sound-check break, Sting caught the French Canadian percussion technician, Stéphane (who is on tour to look after Kevin and his equipment) and second bass player Becky, practising tango together.  Both avid tango students they take every chance possible to perfect their glides and embraces backstage.  Sting joked that he’d make them perform on stage…and indeed now they glide and embrace as part of the show during the captivating “When we dance”.

Kevin’s percussion set-up is pretty impressive, it seems to take up a quarter of the stage; he jumps between a marimba, vibraphone, tubular bells, big gong and numerous latin-american instruments amongst many others.
Spying the sheet music for Roxanne resting on his marimba I pondered how long it takes to learn the music for a show like this, performing nearly 30 numbers a night?  “I was given the music the day before the first show, on the morning of the rehearsal day in London!”  This is apparently perfectly normal, such is the talent and gift of sight-reading of these professionals.   “It was trickier than I was expecting though; if you think that Sting’s tracks have been re-written and arranged for an entire orchestra…that’s a lot of new parts!”

Kevin checks his watch, the show starts in 10 minutes…As he disappears into the stage door, I look down and see I still have my sound-check pass.  With a deep breath I decide to try my luck and confidently stride past security, flashing a smile.  My luck was in…and so was I…the theatre was at its 1500 capacity that night and the show was sensational.  Introducing “When We Dance” Sting speaks to the crowd in soft, confident Italian:

In the first break, we’re back in the bar:  So does he ever get nervous before going on stage with Sting?  “No, not nervous at all, although it’s much easier in the larger venues with bigger crowds where you feel less exposed”.  And let’s face it, the crowds have not exactly been shy in numbers.  In fact the Florence gig was the smallest audience to date, after playing two sell-out dates in Arnhem’s Stadium in the Netherlands for about 45 thousand people, and a crowd of 50 thousand in Poznán, Poland.

What about the leading star himself, ever been caught doing a sun salute in the wings to prepare?  It turns out that for the duration of this tour, the singer, turned Yoga guru, holds yoga sessions after s 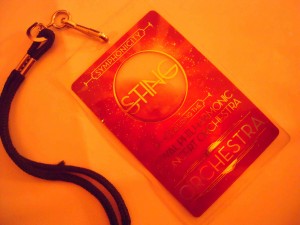 ound check and invites everyone to join him.   “It’s quite popular with a lot of the musicians”, says Kevin, although the only yoga he admits to practising himself is a quick wave of the hand to the class, on his way to the nearest bar!

Kevin remembers back to when all his friends took off travelling for their gap year, saying to him: “what on earth are you going straight to music college for?  He’s happy to assert with a little smirk that he can now indulge in the last laugh as he has managed to travel the world and will continue to do so…doing what he loves…with the likes of Sting!

What does he think of Florence?  “It’s beautiful, and I can’t wait to come back with my partner Danielle – she’d love it!  Although I must make sure I walk back past the, is it Duomo? tonight…I’ve heard it’s worth a photo!”

During the performance, Sting also makes a similar reflection on earlier expectations for his career.  His father apparently wanted him to be a sailor so he could travel the continents and meet new cultures.  “I think I disappointed him” he says, with a cheeky smile.

June 2010 – US and across Cananda, ending in Febuary 2011 in New Zealand via Europe, Japan and Australia.

Ten week European tour started on 2nd September in Oslo then Scandanavia, Russia, Belarus, and the rest of Europe.  Two nights back in the Albert Hall in London via Paris.  Ending in Rome on 10th November.

Joëlle Edwards is an English event and wedding planner, working in exclusive venues across Italy. She recently moved to Florence from London, after having lived and worked in Switzerland, Palermo and Barcelona.
You can reach her at info@joellemarie.co.uk
Visit also: www.joellemarie.co.uk

Brexit and the city….