Trumpets blare, the soft clinking of a metal breastplate bounces off the narrow walls, and leather creaks as the parade marches by while three young emergency medical aids do their best to explain to me, in broken English, how they prepare for the battle that is about to happen.  Sitting in the back of their ambulance, through a patchwork of phrases, I am able to haphazardly translate and piece together the fact that soon, on the field of dirt behind us, noses were about to be shattered, arms and legs bent at unnatural angles, and plenty of ribs crushed. And it was evident why as the intense players flooded into the pre-game area beside Piazza Santa Croce, their passion palpable. After just a few looks at them, I was sure that I was about to watch not one, but a few people die. As the young volunteers, just three of 100 emergency medical service workers on hand, tried to explain this storied tradition to an American tourist, I couldn’t help but notice their overwhelming pride in the sport and their joy at being able to be a part of it. They made up the contingent that also included: two more ambulances, ten doctors on hand, 20 firefighters, and numerous local polizia and carabinieri in full riot gear. The scene was one that would make you think that a city-wide war was about to breakout. But even seeing this, the uninitiated could not possibly be prepared.

Knowing full well about Calcio Storico Fiorentino’s origins in the 16th century, and the subsequent revival of the sport that once was used to keep Roman legionnaires primed for battle, seeing a game has been on my wish list since I first visited Santa Croce square and read about the game in all its glory. Endless blue sky and unrelenting heat, along with bleachers packed with rowdy Italians around a square-shaped arena, were perfect conditions for hand-to-hand combat on the sand that would soon be bloodied. The crowd grew restless, trading taunting chants and smoke bombs (green for the Verdi of San Giovanni, blue for the Azzurri of Santa Croce), as the Bandierai degli Uffizi, the official flag throwers of Florence, and various others in Renaissance dress, paraded onto the field to the beat of the medieval marching band. Finally, each side was allowed to erupt when the teams for their respective quarters were introduced on field to began their warm-ups.

They were mostly shirtless, drenched in sweat (soon to be covered in sand), and wearing pleated parachute pants that a couple had held up by duct tape. Some were wearing soccer cleats, others tennis shoes, a few no shoes at all. They all had intense stares as they practiced their shadow boxing and stretched, before a cannon fired and 50 minutes of bloody mayhem began.

Between 27 players on each of the green and blue teams (four goalkeepers, 3 fullbacks, 5 halfbacks and 15 forwards), the fights started immediately. The 30 forwards lunged at each other as the struggle for the red-and-white ball was volleyed before eventually being grabbed.

While a brutal sport, it is not without tact. The 15 forwards take out the other team’s forwards in order to allow the full backs and halfbacks to advance the ball, with hopes of getting a shot at the 50-meter long goal. Making the shot is easy; it’s getting past the two lines of defense without having your head knocked off that is the hard part! One of the most difficult things about watching the sport (and I imagine even harder if playing it) was actually finding the ball in the scrum of players. And it didn’t help that the skilled players liked to sneakily hide the ball behind their backs before making a dash down the field to attempt a shot at the other team’s goal, often meeting a bone-crushing hit from the opponent’s fullbacks.

The Blues quickly jumped to an early lead that would not be relinquished. But that didn’t stop the crowd’s frenzy and deafening profane cheers, which continued well after the game was decided and ended. 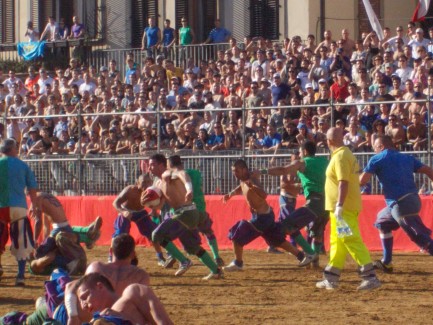 The game was only paused twice, long enough for two sweaty, dirty men to be hauled off on a stretcher by yellow-clad emergency personnel. It was after the game that the real medical rush began, with an endless stream of the terrible sirens screaming down the streets of Florence, hauling mauled men off to the hospital who should have been taken during the match but had maintained their pride to the end. 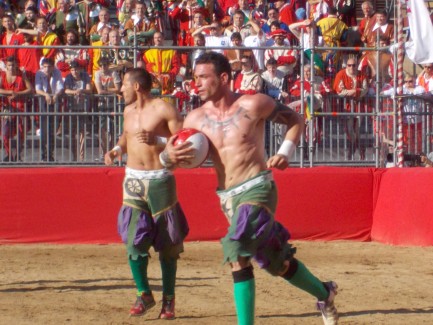 Swarms of people, players, and fans made it nearly impossible to move through the masses. The cries of defeat, the celebrations and taunts, only added to the chaos of the event. This was definitely a cannot miss Florentine event, it really put the pulse of the city and the pride of the people on full display. The game is pure passion and an unbeatable sport!

If you’re brave enough to want to go, there are three games in June every year: the final on June 24th (St. John’s Day – the patron saint of Florence), and two semifinals the week before. This year’s final is the Santo Spirito Whites against the Santa Croce blues. You can get tickets and more information, here! 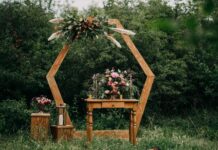