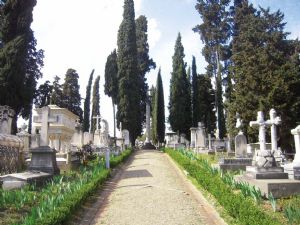 For a great number of Florentines the familiar small, walled oval hill on piazzale Donatello is little more than a roundabout.

Granted, it is a rather mysterious roundabout, higher than most, revealing peaks of elegant cypresses and glimpses of marble tombstones, but undoubtedly a landmark en passant for the modern motorist speeding along the wide viale from piazza Libertà down towards the Arno. However, this urban island, housing the originally named Cimitero Protestante di Porta a’ Pinti, described by custodian Julia Bolton Holloway as ‘a place dense with meaning, a burning glass of history,’ is a worthy destination in itself.

As an English woman living only five minutes away from the ‘English Cemetery’ and knowing embarrassingly little about it, I decided to find out more. Unbeknown to many, the cemetery is actually open for ash burials of all faiths, the most recent having taken place over Easter 2010.

I survive the motor moat and go in. Inside the tall iron gates is a story of a passionate, respectful devotion to the care and restoration of a place remarkable on a sociological, geographical, historical, religious and artistic plane; where we trace human effort in civil rights, abolition of slavery, rights for women and children, the lives of artists, sculptors and poets.

The history of what is called the English Cemetery in Florence dates to the early nineteenth century, when the site was purchased from the Grand Duke of Tuscany in 1827. It was then sold to Jean Pierre Gonin, founder of the Swiss Reformed Evangelical Church, to build the Protestant Cemetery in Florence, and the first burial on the site was Gonin’s son, Jean David Marc, at the young age of 15.

The small hill was originally built by Michelangelo as a vantage point during the siege of 1530. At the time of purchase, however, it had grown larger from centuries of rubbish being thrown over the city wall. Traces of medieval pottery sometimes still crop up in the grounds today.

Only 700 of these graves remain today. The popular name ‘English Cemetery’ arose from the predominance of the English among the Protestants in Florence at the time and the large number of English-speaking people buried here.

Following the demolition of the city walls by Risorgimento architect Giuseppe Poggi to make way for Parisian-style boulevards, the cemetery was forced to close in 1877 under the Napoleonic Code, which forbade the burial of bones within city limits.

Visitors may recognise the central gravel slope featured in the opening scenes of Franco Zeffirelli’s BAFTA award winning Tea with Mussolini, where elegantly dressed ladies and gents of 1930s Anglo society in Florence gather to pay tribute to the prominent Victorian English poet Elizabeth Barrett Browning, whose tomb is among the most visited of the many famous names buried here.
For having been allowed access to film inside, the Italian director donated four stone benches now perched atop the hill, surrounding the central marble column, itself a gift by Emperor Frederick William of Prussia. It was also Zeffirelli’s personal phone call to the mayor of Florence in 2006 that prompted the arrival of traffic lights and a pedestrian crossing outside the main entrance.

The cemetery is also home to the grave of Nadezda (Hope), a Nubian slave brought to Florence at the age of 14 and baptised by a Russian Orthodox family, her tomb bearing a white marble orthodox cross. In the northwest corner of the cemetery you will find the tombs of Shakespeare’s descendants, and across the path from Elizabeth Barrett Browning lies Giampietro Vieusseux, founder of the Gabinetto Scientifico Letterario G.P. Vieusseux, a library in Florence which played an important part in the sharing of cultures across Europe during the Risorgimento.

Among the first tombs to be repaired was that of William Sommerville, whose wife Mary, Scottish mathematician and astronomer, is responsible for the binomial theorem behind the IBM computer, and hence computers as we know them today. Merely by creaking open the rich treasure chest of information when looking at the names buried here, anyone visiting or living in Florence is reminded of why they, too, find themselves in this city that so many deeply love and admire.

I remember being inspired, while at university, by a poet who was able to fill my senses with colour, passion and flowers even in a stuffy exam hall; how Robert Browning described his painful love for Elizabeth and for Florence inspired me to come here.
And indeed I did, nearly 14 years ago, a wide-eyed embracer of all the city had to offer. Though a little more ‘off-piste’ than the regular city sights, there is something rather alluring about this cemetery.

On an earlier visit, I came across a Japanese musician and his curious film crew. They had travelled a considerable distance to find the perfect setting for their video, similarly attracted to the hidden locale.

If you have not yet ventured onto this intriguing island, the library archive of which has just applied to become a UNESCO Memory of the World site, take a few minutes to travel across Florence and travel back a few centuries.

Part II of this article will describe some of the restoration projects and how you can contribute to them.

Article published on The Florentine Newspaper and online in:
http://www.theflorentine.net/articles/article-view.asp?issuetocId=5683

Joëlle Edwards is an English event and wedding planner, working in exclusive venues across Italy. She recently moved to Florence from London after having lived and worked in Switzerland, Palermo and Barcelona. She’d like to sing like Fiorella Mannoia, write like Andrea Camilleri, dance like Ginger Rogers and cook like zia Anna Maria! You can reach her at ciao@joellemarie.co.uk.

10 Things You Absolutely Must Do In Florence In The Spring!