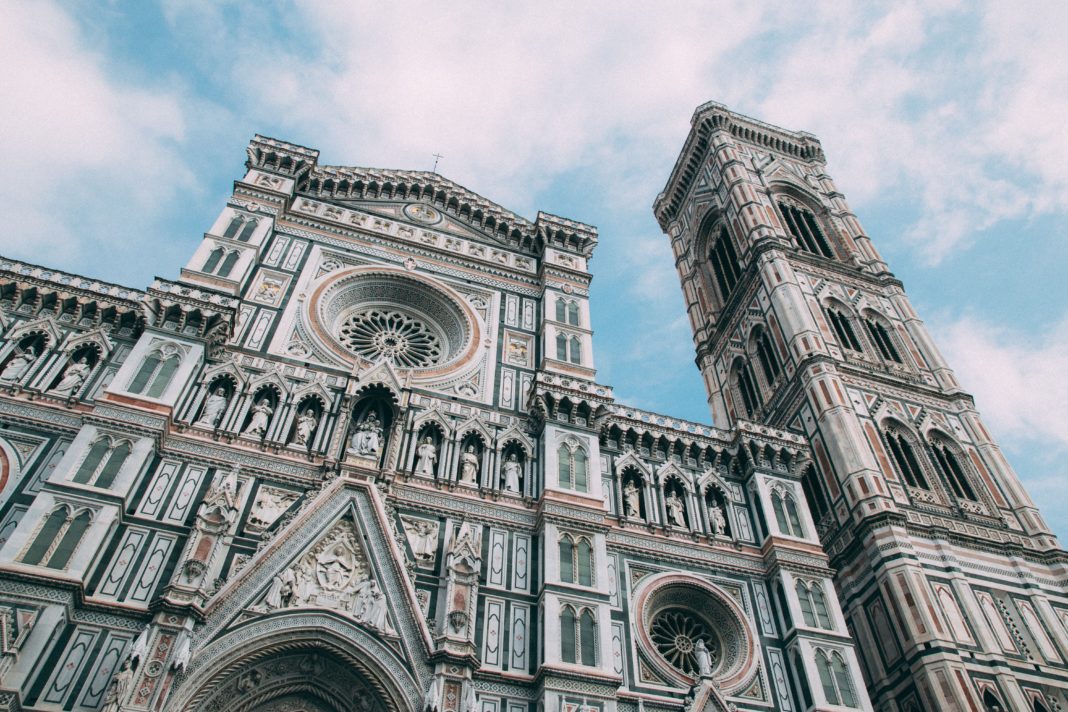 It’s been a while that we’ve only been talking about food and I mean that’s really a good topic and all, but I’m on a diet at the moment so I can’t be doing that to myself anymore, it’s just really frustrating so I’m gonna change topic and make life easier for myself.

Anyway, to get my mind off of food a good thing to talk about is culture, cause really that’s another big one for Italy you know. Plus you’ll really need an Italian monument list in Italy to go through if you perchance forget what you’re looking for when scurrying around some of the culture capitals of the world. We’re going to talk about the most famous landmarks in Italy, so keep that in mind when you’re also looking for your apartments for rent in Italy. We’ll be taking into consideration four major cities: Florence, Rome, and Milan.

So, here it is a good old list of famous monuments in Italy. 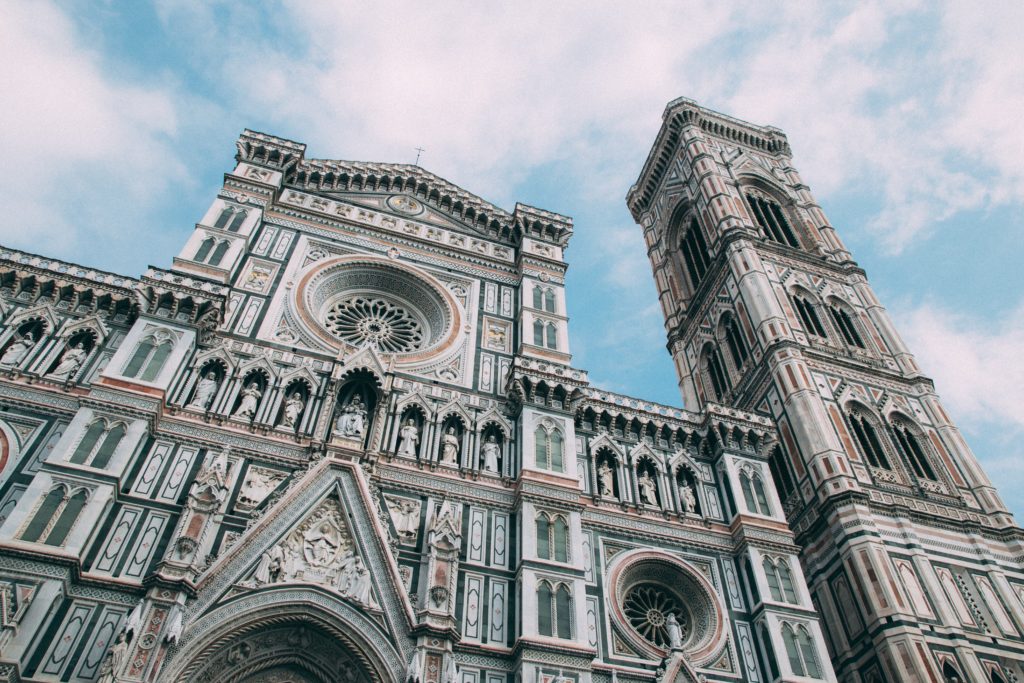 The Florentine Duomo is a renowned italian monument all around the world and is one of the most important Florence monuments of the Renascence, other than being called Duomo (that is more of a title than a name) it is known as Santa Maria del Fiore. The building was started in 1296 following the Gothic style, designed by Arnolfo di Cambio, and was then completed in 1436 with the cupola designed by Filippo Brunelleschi. To keep in mind that the Cupola of Santa Maria del Fiore was the first self-supporting dome to ever be completed. On the left of the entrance to the Cathedral, you’ll find the Campanile di Giotto, that was idealized after the death of Arnolfo di Cambio by his successor Giotto di Bondone, the famous painter, that decided to concentrate his expertise on the bell tower of the Cathedral. With a total of 414 steps, you’ll be able to see one of the best views of Florence. So if you find apartments for rent in Florence Italy, make sure you have an elevator.

Interested in what to do in Florence? Read the complete guide about Florence

The Basilica di Santa Croce is considered to be Florence’s second Duomo, because of it’s grandeur and historical importance. This Italy building founded by the Franciscan friars in 1294 in an area that before the expansion of the city, was marshland. Santa Croce is one of the most famous historical monuments in Italy, not only for its religious importance but also for its role in housing the tombs of some of the most important thinkers in Italian History, such as Michelangelo and Galileo. Don’t be fooled by Dante’s tomb he isn’t actually there. Another thing to keep in mind is that when Florence was to become Capital of Italy, the Cathedral went under renovation, changing its facade in what it is today. If you look at the front of the Church you’ll see a David’s Star, this was implements by the architect in charge of the facades renovation, Niccolo Matas, that wished to buried within, but because of his faith he couldn’t be buried within the Cathedral, so he was buried right in front of the main door to Santa Croce.

Piazza Signoria is the Piazza where you can say that the Renascence came about, it is in here that the Medici, Florence’s ruling family, worked and governed. In the streets, in the Palazzo, and in the Uffizi (meaning uffici in Italian and offices in English), the Medici would take in some of the most important artists to bring about a new cultural revolution that would change the city and the world forever. Some of the most important historical monuments in Italy can be found in the adjacent Loggia dei Lanzi. 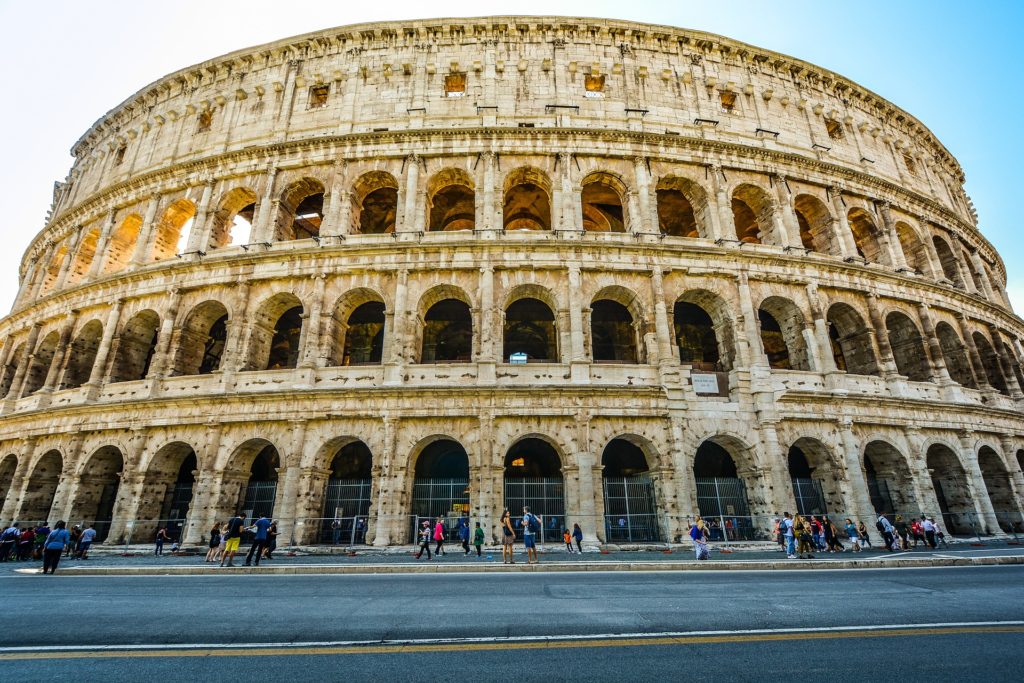 Looking for famous monuments in Italy in Rome? Built under the Emperor Vespasian and finished under his successor Titus, the Colosseum is no doubt one of the most widely recognised Italian buildings and monuments. Called in antiquity Amphitheatrum Flavium, meaning Flavian Amphitheatre, because of the distant of the Emperors that began and finished the construction, it would hold between 50,000 and 80,000 people with some records stating that it held 65,000 spectators for certain events. Used for gladiator events, battle re-enactments, and mock sea battles, it was the centre of Imperial entertainment. No doubt you have to go on a stroll in one of the most important of Rome monuments, when in the Eternal City.

Check our Apartments for rent in Rome Italy. Quality rentals at honest prices

Interested in what to do in Rome? Enjoy the complete guide about Rome 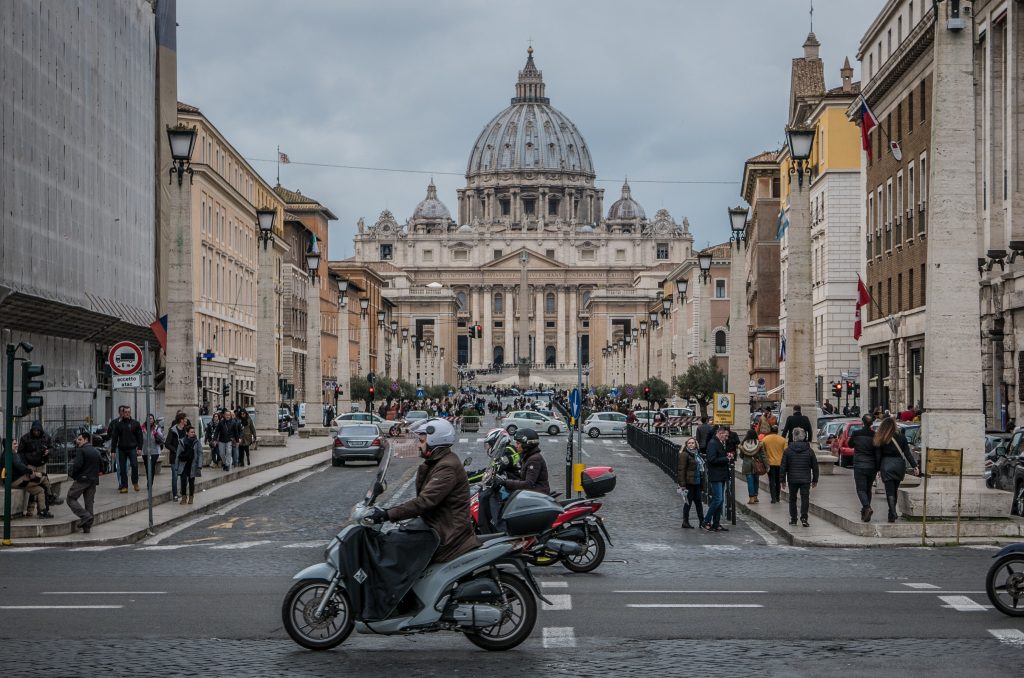 Technically not in Rome, but no worries you don’t need another Visa to get in, The Basilica di San Pietro is the centre of Catholic Power. The House of the Pope, and all of the Roman Catholic Church, it’s status is seen by the grandeur of this Huge Basilica and the space it occupies. Once also the Capital building of the Papal States, it is where some of the most important figures of the Renascence and on, had laid their feet who for political discourse, others for artistic patronage. The Cupola itself was designed by Michelangelo, that coming from Florence, had the chance to study the work of Brunelleschi. This gave him the chance to create one of the best of Italian monuments in Italy. 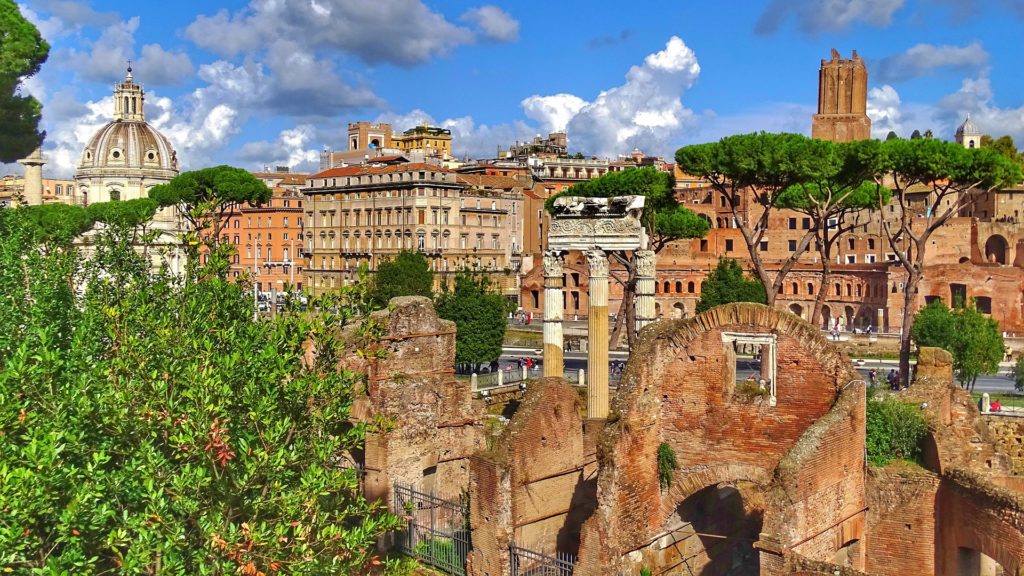 The Foro Romano is on the lit of oldest building in Italy, maybe more of a complex of buildings, but nonetheless the oldest. Built in origin during the Roman Kingdom (753 BC–509 BC), it was what today we could call the city centre. In the Foro you would find marketplaces, squares and streets all used to celebrate the importance of the City. Here is where after Military expeditions the troops would walk through for a Triumph (a celebratory march), where trials would be set, where people would get a chance to buy and sell goods in a commercial enviroment. Rome’s first city centre, today unfortunately you can’t see the hustle and bustle of the Roman period, but no doubt you can feel the presence of what Rome was like. Plus, keep in mind that The Foro Romano is right next to the Colosseum, so if you’re looking for apartments for rent in Rome Italy, you’ll catch two birds with one stone. 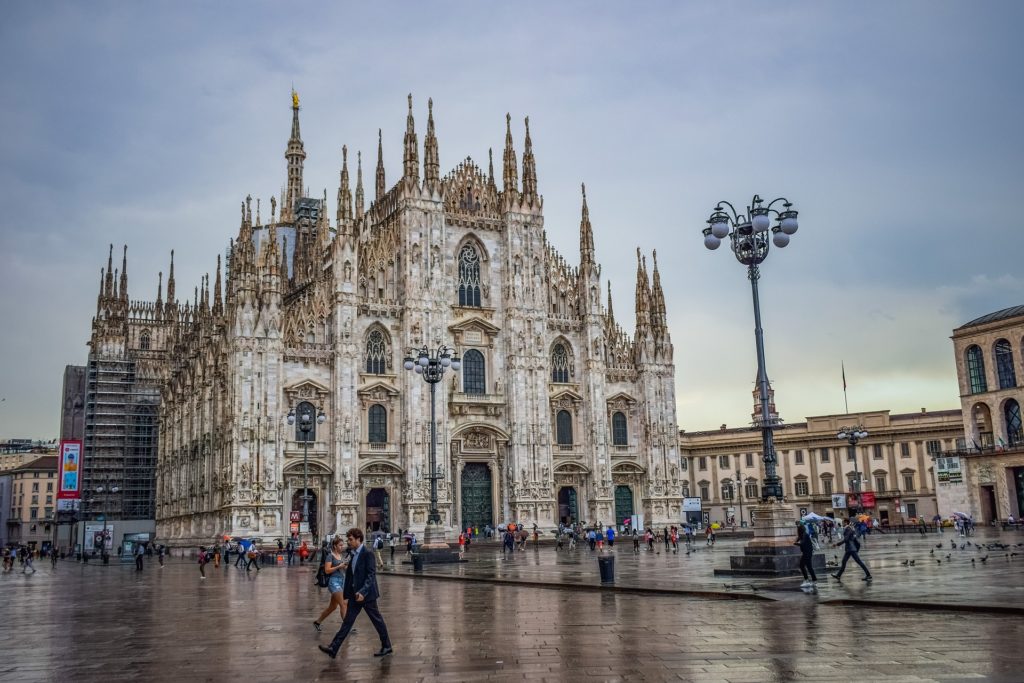 The biggest Cathedral of Italy (after Saint Peters, but technically not in Italy, but in the Vatican State), the Duomo di Milano is also the Cathedral that took the most to make, we’re talking 1386 to 1965 (and yeah that’s not a typo). Worked on by various generations it is the most important Gothic structure in Italy and if you get a chance to see it you’ll understand why it is so important, and why it took so long to make. The detail of the statues that surround the whole building and the fact that none of them are the same, are in my humble opinion, why it took them so long. Anyway jokes aside this is the must see of Milan monuments, plus it’s really close to the fashion district.

Interested in what do in Milan? Enjoy our complete guide about Milan! 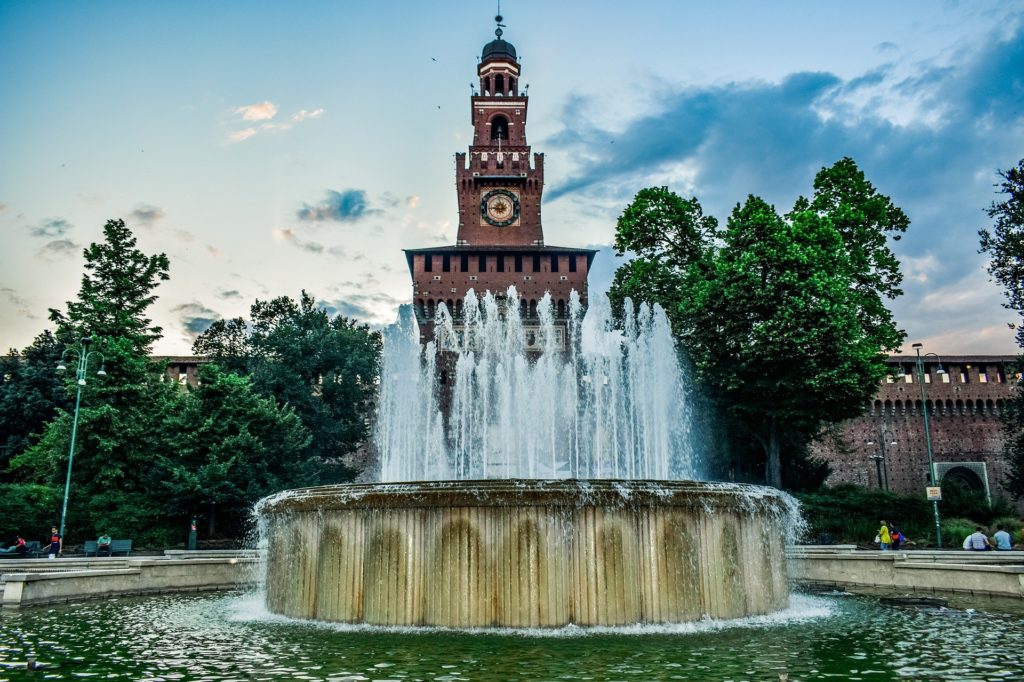 Built by the Sforza family, one the most important reigning families of Milan, the Castello Sforzesco was the northern entrance to Milan and its strongest fortress. Its military use was that of defence but this didn’t mean that it didn’t have any space for artistic expression, with one of the main artists that worked on the realisation was Leonardo da Vinci, that designed many of the rooms in the Castle. Behind the Castle, you can find Milan’s best park, the Parco Sempione that is adorned in the end by a Triumph Arch that can be seen from the gate of the Castello Sforzesco. This is one of the most beautiful areas to find apartments for rent in Milan Italy. Not only because of its vicinity to two famous Italian buildings and monuments, but also because of the very close Cadorna Station. 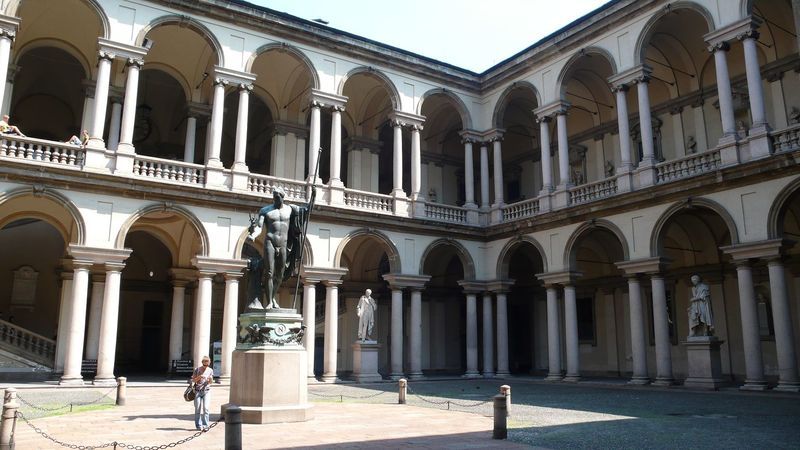 In the heart of the Design District, the Pinacoteca di Brera is an example of Austrian rule over the city of Milan. Firstly a Jesuit enclave, its later became a cultural centre under Austrian rule. Here some of the most fascinating pieces of art can be found, and it’s also the place of Milan’s Academia delle Belle Arti, so if you’re an art student this is the place for you, I mean you’ll probably just have to visit for study purposes. If you’re in Milan you have to go visit, cause really there is nothing better than a stroll in the courtyard of one of the best kept famous landmarks in Italy.