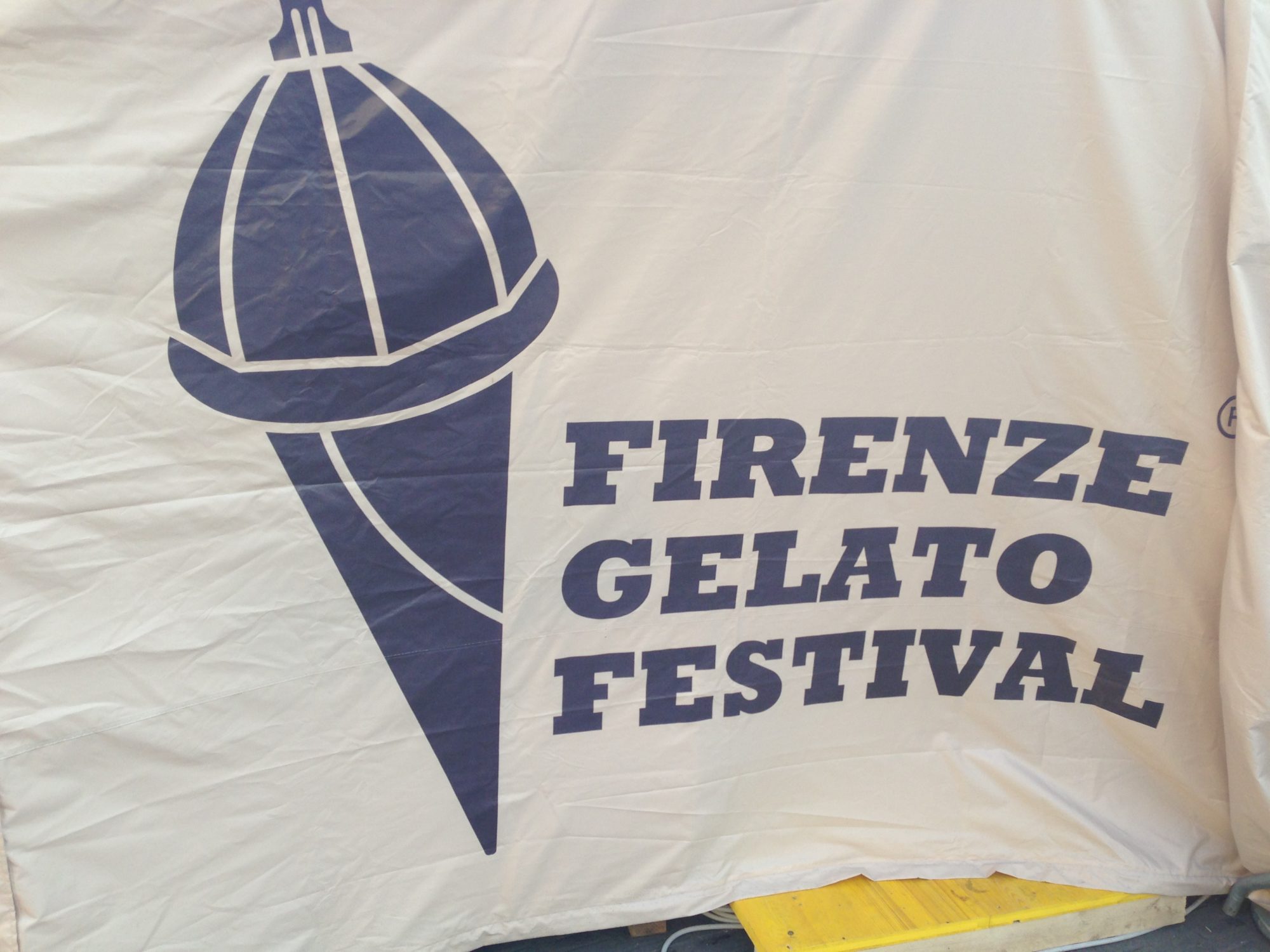 Gelato, gelato, gelato. Italy boasts thousands of wonderful experiences that you just have to take part in, but if you leave without trying the Italian version of ice cream, well then, you weren’t really in Italy; you were lying. So if some gelato is great, what is a gelato festival? Amazing! Imagine three historical piazzas in Florence, Italy filled with gelato for you to taste from around the world. So forget the calories and let’s dive on in… 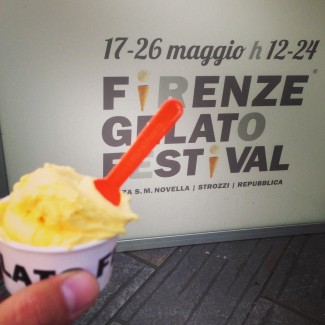 First kicked off in 2010, the Firenze Gelato Festival has enjoyed tremendous international success, amassing about 400,000 visitors each year. Taking place from May 17 to May 26, 2013 in Florence’s Piazza Santa Maria Novella, Piazza della Repubblica, and Piazza Strozzi, attendees can buy a Gelato Card, which gets you 5 tastes (small, overflowing cups of one flavor each), a Gelato Cocktail (oh we will get to this) and a Gelato Festival bag, balloon, and wafers, as well as admission to watch gelato-themed classes, all for 10 euros.

Three squares full of delicious gelato, all for me to try? How could I not be there! So I strolled on in to Piazza della Repubblica, picked up my card (you can purchase cards in all three piazzas), and got right down to tasting. Mouth watering and the Florence sun beating down on me, I tried my first flavor, not traditional chocolate, not pistachio…but rice.  Oh yes, I had stumbled right into the Japan Village.

Complete with a samurai and a booth detailing the Japanese Film Festival taking place at the nearby Odeon cinema, the Japan Village in Piazza Strozzi transports you into the Land of the Rising Sun. At the gelato stand, my sample options included the exotic flavors of rice and green tea. As you might imagine, rice encompassed all the bland flavor of rice, and green tea was by far my least favorite flavor.

With three tastes left, I continued on my journey towards Piazza Santa Maria Novella. The enormity of the flavor hits you immediately as the square is filled with gelato stands, all for your delight. But what intrigued me the most initially was the laboratorio mobile di gelateria, Il Buontalenti, literally a mobile gelato laboratory, where you can witness all your sweet dreams coming true! This trailer, with five huge windows, allows you to watch the masters at work as they carefully handcraft one of the most delicious desserts on earth.  Not only did I get lost in the process, but so did a good half hour of my day.

Nothing like watching gelato being made to get your taste buds buzzing, so I was back on my tasting tour, next stop: gelato cocktail.  Offering two flavors each of alcoholic and non-alcoholic cocktails; these perfected smoothies are truly to die for. The blended combination of Fabbri strawberry and white peach “mixy fruit,” gelato, and ice, topped with fresh strawberries is enough to keep me running back to the festival time after time. In one word, it was delicious beyond all comprehension, and watching them being prepared was almost as much fun as watching the master gelato-makers.

Hailing from Pietra Ligure in Northern Italy, Guido Cortese is the master behind my next tasting. Aptly named Fantasia Mediterranea, this interesting combination was unlike anything I had ever tasted. This delicately prepared mix of fresh pumpkin, cinnamon, myrtle berries, and luscious blueberries made for flavors that resonated with all aspects of my taste buds. Light and fluffy, with berries generously mixed in, it was a nice introduction to my Mediterranean fantasy.

A fellow Northern Italian presented me my next flavor. Hailing from Lissone, Matteo Bellasio proudly brought his Mandorla al profumo di Sicilia con Stevia flavor (almond with Sicilian paste) to the Gelato Festival. In all honesty, it was almost as bland as the rice flavor, definitely not a flavor I would come back too. The supposed enrichment with lemon and orange was noticeable absent, while the use of (artificial?) sweetener was unfortunately all too noticeable.

To add some more international flavor to my palette, I decided I would take a trip to Brazil.  While I couldn’t get any immediate direct flights out of Florence, I just went back to Marcia Garbin’s booth at the Gelato Festival.  And her signature flavor of Caffe’ lime con panna alla Cachaca (coffee and lime with sugar cane whipped cream) was not a disappointment by any means. An Italo-Brazilian who prepares her gelato with only fresh ingredients and seasonal fruit, she truly has succeeded at bringing authentic Italian gelato to San Paolo.

You may have noticed that of the three squares, I only managed to hit two. This was not poor planning on my part but was done by design. I wanted to get a real sense of the handcrafted gelato from around the world and these flavors were centered mainly in Piazza Santa Maria Novella. Piazza della Repubblica was where I picked up my Gelato Card, but the gelato in this square is industrialized gelato, not, in fact, the artisan kind.

If you want to get into the true spirit of la dolce vita (the sweet life) this is one event you truly cannot miss. Getting to sample some of Italy’s proudest creamy concoctions and those from all over the world was definitely a treat! So do yourself a favor and run, stroll, or eat your way over to some gelato! 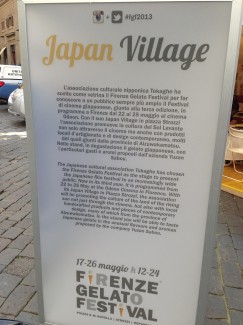 Rice
Nom – Comes with all the blandness of white rice!

Green Tea
Nom – Definitely not a flavor I would try again, but then again I don’t like green tea.

Taking a Picture with the Samurai
Nom, Nom, Nom – While this technically isn’t gelato, it is something you can’t miss in Japan Village!

Gelato Cocktail – Strawberry Peach
Nom, Nom, Nom, Nom – Yes, this got an extra ‘nom’ because it was that good. Absolutely delicious.

Matteo Bellasio – Mandarola al profumo di Sicilia con Stevia (Almond with Sicilian Paste)
Nom – Like the rice, a bit bland on flavor – I could only taste the sugar.