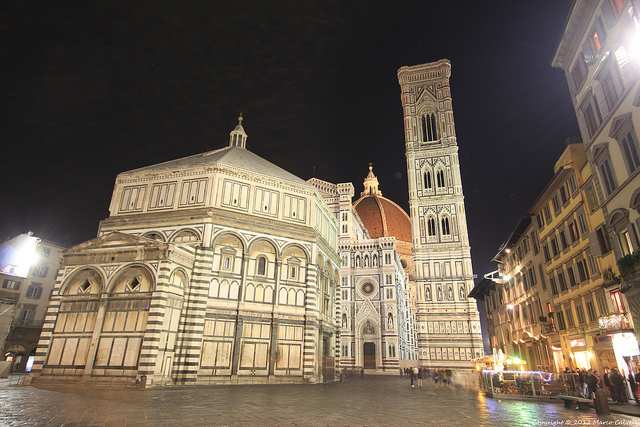 Bocelli…Andrea Bocelli… You know you’ve heard that name somewhere. It’s clearly Italian, and I gave you a pretty big clue with this article’s title – that’s it! He’s the opera singer! What was that famous song of his again? Ahhh, yes. That’s the one.*

*If you don’t understand the lyrics, the listening experience is even finer if you take a look at the gorgeous English translation of “Time To Say Goodbye.”

Taking a break from his busy schedule of: selling over 75 million records worldwide; appearing in People Magazine’s 50 Most Beautiful People; earning a star on the Hollywood Walk of Fame; and a spot in the in the Guiness Book of World Records; on September 8th, 2012, Bocelli will be performing a free concert in Florence, Italy’s Basilica di Santa Maria del Fiore, or what you might know as the Duomo.

There must be something really special to have brought about such a delightful occasion for our ears. In fact, the performance marks the presentation of the renewed “Gates of Paradise,” which, after 27 years of restoration, are finally ready for the public eye.

The gilded bronze doors were originally crafted by Lorenzo Ghiberti in the 1400s. Most visitors to Florence have only seen the repplica that adorns the northern entrance to the Duomo’s baptistry.

You can reserve a spot, at no cost, by calling 055.26524222 (as soon as possible, as seats are limited). Get there early to grab one up front; you just might find yourself next to the Metropolitan Archbishop of Florence, Cardinal Giuseppe Betori, who has already confirmed his presence.

See you there! Probably through tears of being moved beyond belief 🙂