Home Culture All the Leonardo da Vinci art you need

It’s getting closer and closer the 500th anniversary from Da Vinci’s death is just a month and a half away, so we are gonna keep talking about him cause that’s what the whole Da Vinci segment is all about.

His love for art began at a very young age, and thanks to that he was able to start his apprenticeship at the Bottega del Verrocchio, one of the most important schools of art in Florence at the time. That is where he completed the first of the various Leonardo da Vinci works — the aforementioned Baptism of Christ — and also it is in this first painting that we start to see the world famous Leonardo da Vinci art style.

So, how many paintings did Leonardo da Vinci paint? When we talk about paintings he completed 30, or at least 30 are the ones we know about. In this post we’re going to talk about 10 of them.

The Mona Lisa no doubt this is the Leonardo da Vinci most famous painting. Everyone, young and old, know about this masterpiece, and a lot of people ask themselves why did Leonardo da Vinci paint the Mona Lisa, the answer is simpler than what you could imagine. He was commissioned by Francesco del Giocondo to make a portrait of his wife Lisa Gherardini. Thus the name Mona (Madonna, Madam) Lisa. Now the other question is why do some people call this La Gioconda painting, that is because of her husbands family name. There is no doubt that this the official Leonardo da Vinci signature piece.

The Last Supper painting is one of those that are never gonna be forgotten, even thanks to movies like the Da Vinci Code and endless documentaries, that made sure this piece wouldn’t risk being forgotten. The Leonardo da Vinci Last Supper, was made on request of Ludovico Sforza, the Duke of Milan, as part of the renovations of the Santa Maria Delle Grazie convent in Milan.

One of the only pieces of Leonardo that you can find in Eastern Europe, the Lady with and Ermine portrays Cecilia Gallerani, mistress of the Duke of Milan, Ludovico Sforza. So yeah, he would have a mistress on the side and commission church frescos to make sure he wasn’t sinning too much. Today, you can find this amazing piece in Poland because it was bought by Prince Adam Jerzy Czartoryski in 1798, that immediately knew that this was a Da Vinci, even though it still wasn’t attributed to him yet. You really have to know your Leonardo da Vinci drawings to make an investment like that.

The latest addition to the artist’s roster is the Salvator Mundi painting. A Leonardo da Vinci Jesus Painting that had brought a great deal of attention to it after being sold for 450 million dollars at auction in 2017. Now, some say it really isn’t his, but the Louvre of Abu Dhabi paid that much so it better be. Now being that it has just been discovered to be a Leonardo and not a copy, no one is really sure about when it was made, but the most prominent theory is the one that says it was painted for Louis XII of France after he conquered Milan and Genoa. So, good on you da Vinci Salvator Mundi for making it in the high art world.

Considered to be the last Leonardo da Vinci pictures painted by the artist. Finished around 1516, it depicts Saint John the Baptist in a chiaroscuro with a smile that resembles that of the Leonardo da Vinci Mona Lisa, this opened up the debate that both subject are actually Leonardo’s assistant Salai.

We already talked about the first painting Leonardo made under the tutelage of Andrea del Verrocchio, but we didn’t talk about this piece that was completed by the artist while still working in the studio of his master. Completed between 1472 and 1475, it is still unknown if there was also the collaboration of his master in the making of the painting, who knows maybe we’ll find that out sooner or later.

How are we gonna put this, so yeah we know there is this painting, but no one has actually seen it except those who painted over it. So it was made to commemorate the Battle of Anghiari that took place in 1440, it was a huge painting on one of the walls of the Salone del 500 in Florence’s Palazzo Vecchio, but was then covered by another huge artwork. Some say that it was because Leonardo miscalculated the time it would take for the paint to dry those ruining the painting. But hey you can see some sketches that we are still able to see today.

This amazing Late Renaissance painting on wood by Leonardo is no doubt one of my personal favourite that he created. It’s detail in such a simple image leaves shocked every time I see it. It was made in 1508 for the House of Gonzaga in Mantua.

The Virgin and Child with St. Anne

Another beautiful piece of Leonardo that can be found in the Louvre in Paris is The Virgin and Child with St.Anne. The uniqueness of this piece is how when the Louvre started studying the painting itself, it found so many Leonardo Sketches behind it that it was the first time in history where the back of a painting had such a collection art on it. 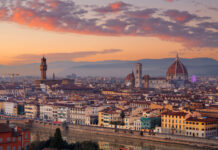