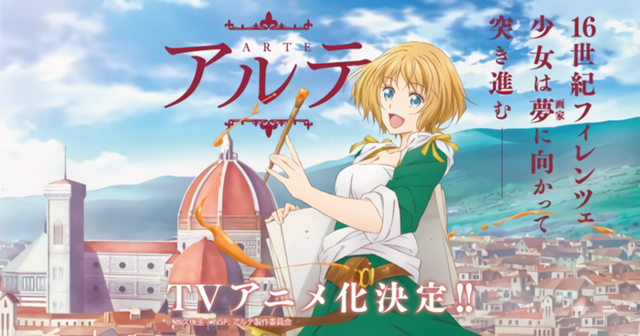 Now I’ve been in the house quite a while now, and you know what that means? I’ve got a lot of time to think about content to binge!! So, in a previous post our intern Chi-Chin, posted about a great Italian series to watch during your quarantine, and you should read up on that. But what I’m going go on about is the new series Arte the anime adaptation.

Well, I’ve always been surrounded by anime growing up in Italy, cause most cartoons were imported from Japan. There were very few cartoons that were made in the country, and most were the classic American cartoons, but mostly we were binging Dragon Ball Z or Rossana, that second one is pretty much the original Hannah Montana, don’t believe what anyone else has to say.

Now I’m going to talk about the Arte anime adaptation, because it has to do with Renaissance Florence. The premise of the show is about a girl called Arte (that means art in Italian if you were wondering) that wants to make in as an…Artist (whaaaaat?) During the Florentine Renaissance. She’s under the tutelage of Leo, that I’m going to go as far as to say in Leonardo da Vinci, and we’ll find out how hard it is to be a woman competing in a mostly mans world.

Plus one thing I really love with animes is how Japan interprets and represents western culture. It’s such a unique point of view that for us that live here, it can be eye-opening. Now the only thing to do is see how Kei Ohkubo, interprets this historical period.

So, in the meantime enjoy the trailer and let us know what you think about it!

Plus, if by any chance you want me to write about more anime recommendations I’m down. We all have a lot of time on our hands now, so we might as well find some good content to enjoy!