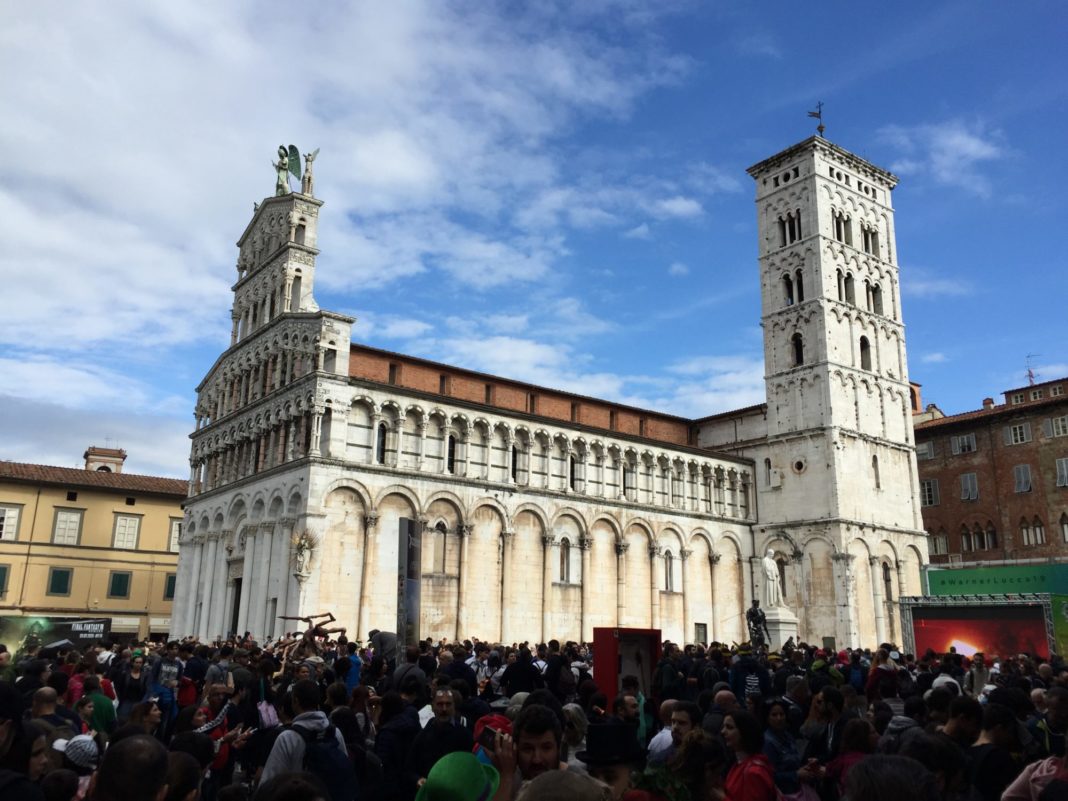 About a month ago I dropped a post about the Lucca Comics and how much hype was around this edition, now I’m back from Lucca Comics & Games Lucca Italy and it’s time for you to find out about it.

As I was saying last time, Lucca comics Italy is the most important Italian comic-cons, you know what I’ll go out of my way to say that it’s also one of the most important around Europe. This year they’ve beaten all previous records in ticket sales, reaching a whopping 270.003 Lucca comics tickets sold (yeah that final 3 is part of the official data they sent me in their press release). Anyway, I’ve got to say that even though the weather in Lucca Italy wasn’t of the best, mostly raining and I mean like strong raining, they were able to outsell themselves another year in a row.

First things first, how did I get from Florence to Lucca? It’s pretty simple luckily there is a train that passed by Lucca on the way to Viareggio, so it can vary from an hour and 20 mins to an hour and 40 mins, which varies on the fact that the train does all the intermediate stops or only the important ones. Now if you don’t know where Viareggio is, you might also be wondering where is Lucca Italy? First and foremost, it’s in Italy (lol) and it’s between Florence and Versilia (that’s the Tuscan Shore. So yeah that’ where Lucca Tuscany is. Anyway, the ticket will set you back around 8€, so 16€ back and forth.

Now that you know how I’ve got there you can get to Lucca yourself, and if you’re wondering about things to do in Lucca Italy, I’ll say that the most important thing to do in Lucca is getting a chance to visit the Lucca Comics, but if you didn’t get to chance to visit one of the Lucca comics and games 2019 dates you’re bound to see some amazing churches, that’s why the city is called the 100 Church City.

Anyway, enough about Lucca, let’s talk about the day I’ve spent there so you know what to expect the next year if you’re thinking about going. At Lucca Games, you get to peak at some of the most important and followed artists, comic books, and celebrities in the comic-based world. This year Sir Patrick Stewart made a visit, the new Netflix series The Witcher premiered its trailer, and Joe Manganiello took part in the biggest D&D campaign that ever happened in Europe, so it’s pretty much a nerdfest, but the best nerd fest ever.

Plus, like every comic-con, you can’t forget about the cosplayers, and this year Lucca comics Cosplay was focused around the release of Kingdom Hearts III, and I’m pretty happy cause last time I went everyone was dressed as Geralt of Rivia and it was tres confusing. But The Chris prize for best cosplay goes to this older gentleman dressed as Bilbo, you’ll see him after this paragraph.

As you could tell the city was all dressed up, there we’re people from all over Italy, and all over the world, just think about Hirohiko Araki, the mind behind JoJo’s Bizarre Adventures, talking for the first time in Italy, and the presence of Suehiro Maruo that I didn’t get the chance to see unfortunately.

Keep in mind that the whole town is ready for the event, so you have a variety of pop-up stores in stores that tend to sell other things than nerdish paraphernalia, so to get around they would give you a Lucca Italy map all in a Lucca Comics 2019 style.

Now, just enjoy some pics and think about going next year, and not only if you’re residing around Florence, cause when Lucca Comics is on the train system adds Lucca as a stop for a lot more trains than usual.