Home Culture Beers of Italy: the brands, the styles, the bottles 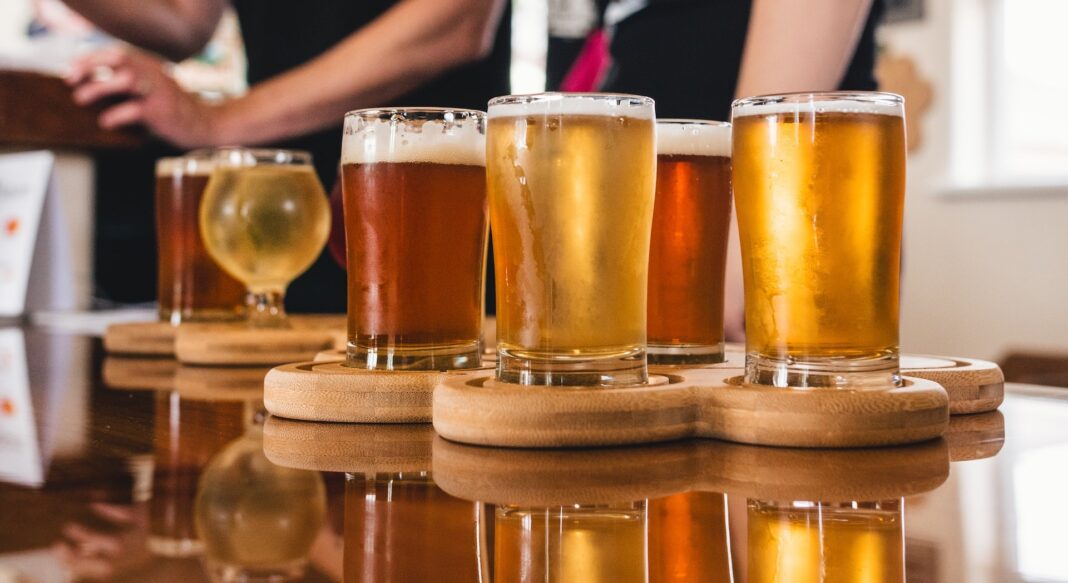 Italian Beer: what are the most famous brands

When it comes to beer, one might think Italy has nothing to offer, as the country main focus is on wine production. Despite this, Italians have a rich and diverse beer culture, with many different types of beers to choose from. From lagers to ales, Italian brewers are known for their unique styles and flavors. People from Europe and UK like it. Whether you’re looking for something light or dark, there is an Italian beer that will suit your tastes.

What kind of beers Italians drink

When it comes to the most famous brands of Italian beer, Peroni Nastro Azzurro stands out as one of the best-known in Italy and around the world. This pale lager has been brewed since 1963 using only natural ingredients such as barley malt, maize (corn), hops and water – giving it a crisp flavor that pairs well with all kinds of food dishes. Other popular brands producing the classical Italian lager are Poretti, Moretti, Menabrea, Forst, Raffo, Ichnusa. You can find those popular brands with other names including, for example, Moretti La Rossa (dark red ale) Birra Menabrea (amber ale), Baladin Super Baladin (IPA), Ichnusa Pilsener (lager).

The top 10 Italian beer brands are here, and they are sure to make your tastebuds tingle! Italy is known for its artisanal beer, so it’s no surprise that its selection of beer brands is top-notch. From the classic Peroni to the more adventurous Baladin, these brands have something for every beer lover. Peroni is a light lager that is the undisputed king of Italian beer. Moretti is another classic – a full-bodied pale lager with a hint of bitterness. Baladin, this Italian craft beer has become increasingly popular in recent years. It’s a pale ale that is both light and refreshing, making it perfect for a summer day. For something a little heavier, try the dark ale of Baladin Nora. Birra Moretti La Rossa is a full-bodied doppelbock that is perfect for a cold winter night. There are also plenty of Italian IPAs, and for those who appreciate a light wheat beer, Birra Del Borgo Re Ale and Le Baladin Blanche are great options. Next up is Brewfist, a more experimental brewery that focuses on creating unique flavors. Their beers range from IPAs to sour ales, and they’re all delicious.

For those looking for a classic Italian beer, you can’t go wrong with Birra Moretti, one of the oldest beer brands in Italy.

So whether you’re a beer connoisseur or just looking to try something new, these 10 (11!) Italian beer brands are sure to satisfy. So no matter what type of beer you prefer, there’s bound to be a great Italian brand for you!

Birra Moretti is an Italian brewing company, founded in Udine in 1859 by Luigi Moretti. The company was initially expected to produce 250,000 litres of beer a year, enough to meet the provincial demand. In 1996, the company was acquired by Heineken N.V., and the brewing plant in Udine was sold to the newly formed Birra Castello S.p.A. Moretti is now a brand of Heineken. Since its inception, Birra Moretti has become a symbol not only of Italian beer, but also of Italian culture and tradition. The brand takes its name from Luigi Moretti, a wholesale merchant of cereals and wines from Udine.

Over the years, the Moretti family owned the brewery and business until 1989, when it was sold to a consortium of other brewers, including Heineken. Today, Birra Moretti is one of Italy’s most loved and internationally recognized beer brands. It is one of Italy’s oldest operating breweries, and continues to produce quality beer made in the traditional way. The company now owns the Birra Moretti trademark, and has six beers under the Birra Moretti brand. These include: Birra Moretti, La Rossa, Ricetta Originale, Baffo D’Oro, Doppio Malto, La Bianca, and Zero. Birra Moretti is also known for its special editions, such as Campioni di Emozioni and La Cucina Stellata, as well as its football trophy and stadium.

In addition to these larger commercial breweries there are also small microbreweries producing craft beers throughout Italy which offer more variety than ever before! These range from lighter wheat ales like Del Borgo ReAle Extra IPA or LeBaladin Xyauyu Barrel aged Barleywine. Through darker stouts like Montegioco Draco Imperial Stout; right up to sour fruit flavoured lambics such as LoverBeer BeerBera Raspberry Sour Ale. All these brews can be enjoyed on draft at select bars across Italy so if you’re feeling adventurous why not sample some local specialties?

Italy is home to some of the best microbreweries in the world, and its craft beer scene has been growing rapidly over recent years. From classic lagers to modern takes on traditional styles, Italian breweries are producing a wide range of exciting beers that have earned them numerous awards. One style that has become increasingly popular in Italy is Grape Ale —a unique blend of ale and grape juice or wine which produces a refreshingly fruity flavor profile. In this blog post we’ll take a look at some of Italy’s top microbreweries producing Grape Ales and their award-winning beers.

Birra del Borgo is one such brewery located near Rome whose award-winning lineup includes several varieties of Grape Ales made with different types of grapes including Chardonnay, Merlot, Moscato di Pantelleria and Nero d’Avola grapes from Sicily. Their “ReAle Extra” won gold medals at both the World Beer Cup 2016 as well as European Beer Star 2017 for its complex aroma featuring notes from all four grape varieties used in production along with hints citrusy hops giving it an incredibly balanced taste experience overall.

Another highly acclaimed brewery making great use out of Italian ingredients is BrewFist whose flagship beer “Spaghetti Western India Pale Ale” was rated among top 50 beers by RateBeer users worldwide! They also produce an excellent selection of Grape Ales such as Moscatello IPA.

If you’re a beer enthusiast looking for an unforgettable experience, look no further than Tuscany, Italy. This region of the country is home to some of the best microbreweries in all of Europe and offers visitors a unique opportunity to discover new flavors and styles.

On a Tuscany beer tour, you’ll visit some of the most popular breweries in the area, including Birrificio Artigianale di Pontedera, Birrificio del Forte in Versilia, Brasseria della Fonte and Podere la Berta in Siena. You’ll learn about the brewing process and get to taste some of the delicious beers that are produced in this part of Italy.

Apart from those examples, here you find a complete list of micro-breweries in Tuscany. Come visit this region in order to:

The craft brewing scene in Italy has been growing rapidly over recent years and many small brewers have emerged offering beers that reflect the culture and terroir of their hometowns. In Tuscany specifically, there are dozens upon dozens of microbreweries producing everything from classic pilsners to barrel-aged sours with ingredients sourced locally or grown onsite by hand. This means each brewery provides its own unique take on Italian beer so be sure not miss out!

There is nothing quite like enjoying freshly brewed beers right at source – straight from the taproom! Many local brewpubs offer guided tours where guests can learn about how their favorite beverages were made as well as sample them directly off tap alongside delicious food pairings prepared by talented chefs who know exactly what goes best with specific types or brands of beer (e.g., IPAs go great with spicy dishes). Plus it’s always fun exploring different parts around town while doing this too!

By drinking craft beers produced in smaller batches rather than mass market brands you’re helping support both independent businesses owners but also farmers who supply raw materials such as hops or barley which make up part ingredients used during production process . What better way could there be then showing your appreciation towards people making amazing products?

Taprooms and open-breweries in Tuscany, Italy